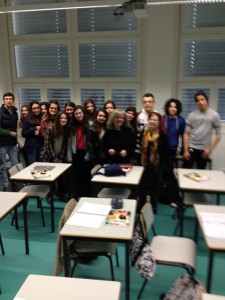 Joe’s intrepid band of volunteers had another good day continuing to work with students at several schools and also with one-on-one tutoring.  David reported that he and Noreen had a lively discussion with a 10th grade class who had formulated questions regarding the media and censorship in the U.S.    They also met with a 9th grade class whose teacher had requested a discussion about part-time jobs for students, and finished their day with a first-grade class using flash cards for simple words.  They learned that the practice at these schools is for the teacher with the most seniority to selected the best students for an “A” level class, then the next selects students for the “B” level and the remainder of the students are put into a “C” group.

Karen continued tutoring at the library, while relative pronouns were the highlight of Ann’s sessions.   Ruth had asked the young man she has been tutoring to bring some of the books he has illustrated and in addition he gave her a beautiful bookmark which he’d created for her.  She also said that their teacher told them that the previous day she had purposefully made some grammatical errors in hopes they would correct her mistakes.

Lynne used animal card games to start one of her classes.  She also explained how to do a wheel of fortune game with teams of students working together to reassemble a sentence.   Another class worked at computers on an assignment to explain the difference between public and private schools and another examined an online vocational brochure.

Barbara played bingo with one class and brought a cooking recipe to another.  She had a wonderful experience accompanying a teacher to a tutoring session with a deaf student who used sign language (via a translator) to learn English.

Thought for the day:  “One’s destination is never a place, but a new way of seeing things.”
– Henry Miller

Links in the chain of serviceRomania: Home Away From Home!
Scroll to top