Travel is so educational, especially when it’s more than a tour as in “if it’s Tuesday it must be Poland”.

Yesterday I was slightly lost in Beja. A couple from Winnipeg, Canada asked me directions to the castle. I flapped my arm in the general direction and went on. Two hours later we crossed paths again: they found it! They were visiting the Algarve and in Beja for one day. Unimpressed with Portugal, they plan to go to Arizona next winter. As we chatted my students waved, and greeted me by name. That’s why I travel with Global Volunteers: for a while I’m at home in Beja, Portugal. 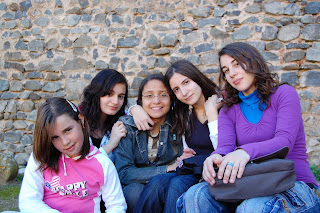 In the classrooms here I have much better perspective due to continuity. I feel I’m able to help build understanding of my language and culture more as I work with the same teachers and students several times.

Patricia’s interview yesterday gave me another perspective on Portugal’s culture. She says her father shares the point of view of many Portuguese: Don’t volunteer. It’s a waste of time and energy that could be better spent earning income for yourself. Of course he helps his own family and neighbors; I seldom interact with my neighbors, but go around the world at my own expense to help strangers!

Thought for the day:

Don’t judge someone until you have walked a mile in his/her moccasins.

We Have Planted the Seeds for the GrowthWednesday, May 27th
Scroll to top