Think of China. What comes to mind? Most global citizens have a broad range of perceptions when it comes to China, both positive and negative, based on its’ vast cultural, political, and geographical history, as well as current events.

Some regard China as the cradle of civilization. What is certain is that the Chinese people play a leading role on the worlds stage. A good and stable relationship between U.S. and China becomes more and more important to world peace. Students of all ages are tomorrows’ global leaders. You can directly shape our shared future by teaching conversational English in our partners’ classrooms and communities, and contribute to a foundation for long-term peace and understanding between our two societies.

Here’s how you can help:

“24 years ago, when I was a middle school student, my classmates and I became one of the first groups of students in Xi’an to receive the volunteer service of Global Volunteers, who opened a door for me to the world. For years, my life have been changed in such a dramatic way that I grew from a teenager who was nurtured by volunteerism to an adult who found my life joyful and fulfilling by serving others.” We respond to the requests of over 70 educational institutions in Xi’an, Shaanxi provinces – for native English speakers to teach conversational skills in Chinese classrooms. Work in lively school classrooms or in small “camp” groups. On these programs, you can help Chinese learners prepare for work in the global community.

You can help teach adult students conversational English as they prepare for work in the global community where knowledge of English is essential. In Xi’an volunteers work in college classrooms. The great demand for assistance of Global Volunteers with this important work is demonstrated by the fact that we have been invited to hundreds of schools here since 1996. We currently focus our effort at the School of Foreign Languages of Northwest University in Xi’an, the Shaanxi College of Communication and Technology, the Shaanxi Normal University, the Xi’an Biomedical Technical College and the Xi’an High-Tech College. Most students at these schools have never spoken with a native English speaker and are thrilled to have a chance to practice what they have learned with volunteers. This practice helps them to build confidence in learning the language. Many students who have been taught by volunteers are now English teachers, interpreters, or work in other jobs where they are able to use their English with more self-confidence. Volunteers use a variety of teaching methods, including small discussion groups and holding English storytelling and imitation contests. Many times you will have a chance to enjoy a performance by your students including songs, skits, and plays! No special skills are required of English-teaching volunteers. Simply talking about the American lifestyle and culture will prompt students to interact, question, and practice their speaking ability. Also, many of the techniques in Global Volunteers’ Conversational English Resource Manual will help prepare you with ideas and plans for working with your students.

Global Volunteers China Country Manager, Wang Bao Li, leads all teams in China. In close cooperation with our community partners, Bao Li will facilitate your team’s orientation, assist you in being fully engaged in your assigned work project(s), and manage all project-related logistical issues. Bao Li worked with teams of Global Volunteers through the Sino-American Society for many years before joining the Global Volunteers staff in 2006. As a community member, Bao Li will introduce you to the community, help acclimate you to the local culture, invite you to community events, and engage you in the day-to-day life of the community.

While on your service program, three meals a day are included in your service program contribution. You will dine at the hotel for a combined Chinese and western buffet-style breakfast with many choices including fried eggs, bacon, toast with jams or cheese, steamed bread with fillings, pastries, yogurt, milk, seasonal fruits, and noodles. For lunch, meals will be taken either at the hotel, local restaurants, or with students and faculty at your school site. Usually, a variety of dishes prepared in different ways are ordered for the group to share. Some common dishes include sautéed broccoli with garlic, sweet and sour pork/chicken, scrambled eggs and tomatoes, spiced pork ribs, dumpling or wonton soup, fried rice with green peas and ham, and baked bread in beef or mutton broth. Desserts, soft drinks, and alcoholic beverages are readily available for an additional charge. The team stays at the Xi’an Le Garden Hotel, a four-star hotel located southwest of the ancient city wall and close to the huge shopping complex – Tang Dynasty West Market. Rooms at the Le Garden are airconditioned and have two twin beds or one double bed, a closet, a mini fridge, a television, a telephone, and a private bathroom with a shower and a bathtub. The hotel is designed in Chinese Tang Dynasty style and has a beautiful garden in its’ backyard. Wi-Fi is available free of charge. The English version of the China Daily newspaper is provided by the hotel and the rooms also have English TV channels such as BBC and CCTV news.

In the evenings and on the weekends you will have free time that you can use to explore the city of Xi’an. As the capital of eleven dynasties, Xi’an attracts a cosmopolitan mix of diplomats, merchants, and students from countries across Asia, Europe, and the Middle East.

The Qin Dynasty, the first to unite all of China under one empire, was founded in Xi’an in the third century BC. Qin Shihuang, the emperor who united China, left many legacies. He created the country’s first standard system of currency and written language, and he conscripted hundreds of thousands of laborers to build the Great Wall. The emperor’s greatest legacy in Xi’an is the Army of Terracotta Warriors who vigilantly guarded the area surrounding his tomb. Workers digging a well in 1974 discovered this underground vault of earth and timber that revealed thousands of life-size statues of soldiers and horses in battle formation. You can also visit the Forest of Stone Tablets devoted mainly to the history of the Silk Road. The museum’s collection of 2,000 massive stone tablets, chiseled with the work of China’s ancient calligraphy masters, is the largest stone library in China. Near the museum lies the wall built around the city in 1370 and is the only ancient city wall that is still complete in China. It is also a city of many temples and pagodas, including the historic Big Wild Goose Pagoda, home of Buddhism in China. There you can view massive water fountains and watch the spectacular “dancing water” light and music performances each evening. There is also the Shaanxi History Museum, ranking No. 2 in China, which successfully represents the great extent of the ancient history and civilization of China. 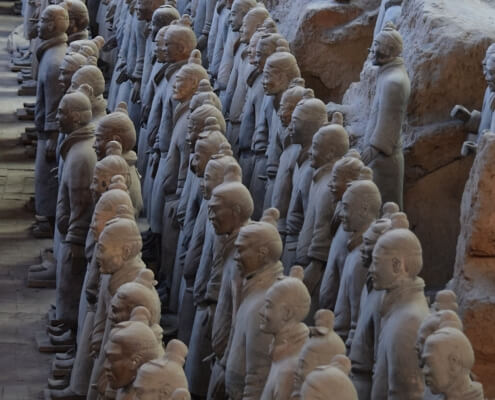 Volunteers’ service program contribution covers all lodging in double accommodation, three meals a day, in-country team transportation, emergency medical evacuation insurance, all preparatory materials, orientation, a full-time team leader, and administration costs. Single rooms are available for an additional fee. The service program fee is $2,897 for one week, $3,112 for two weeks, and $3,327 for three weeks. Please ask your volunteer coordinator about extended stay options; referral credits; and discounts for students, companions, alumni, early team starter, and children under the age of 12 with an accompanying adult. We also encourage you to use Global Volunteers’ online fundraising tool where you can create a personalized webpage to request partially tax-deductible donations from family and friends to help cover your service program contribution. Airfare and free time activity expenses are your responsibility. The service program contribution and airfare are tax-deductible for U.S. taxpayers.

“A bit of fragrance always clings to the hand that gives roses.” Call one of our Volunteer Coordinators at 800-487-1074 to register or reserve your spot online.

You CAN make a world of difference!