“Un oso, ” I answered. A bear. “Oso, ” repeated four-year-old David, as he flipped to the next page of the book. David sat languidly at my feet in the midst of a circle of small couches. Next to me clung his eight-year-old sister Marisa and their other sister Blanca, 13, with eyes like a 40-year-old woman.

I couldn’t help but make the comparison between Blanca and my own sister of the same age. Would my sister know what it feels like to work in shoes that barely covered her toes? Would she be disappointed by her wardrobe? Conversely, would Blanca complain of the opportunity to go to school past the eighth grade?

I was in Ecuador with nine volunteers from Global Volunteers to work with the children of our host community. Global Volunteers’ policy is to work side-by-side with local people so that they can target the most useful projects and feel ownership in the results. In this case, we had three projects to finish by the end of our two weeks there. The first was to create a wheelchair-accessible garden. The second, to cement together a rock wall running beside a wheelchair ramp. And finally, to pour cement for the roof of a house next to the one already there.

On the August program, our team ranged in age from 16 to over 80 years. Although our ages varied, our enthusiasm didn’t. I knew some Spanish but other volunteers did not. Even so, language was not really a barrier. The warmth of the Ecuadorian people, open hearts and minds, made communication easy. Dictionaries were passed around during lunch breaks. Sometimes I translated more complicated questions. I asked the Ecuadorians about their impressions of us. Some of them responded that we seemed like millionaires. Others had the impression that North Americans helped each other out all the time. How I wish!

My memories were sparked by vivid images of the people and our work. I remember one moment where I joined Blanca in lifting a box of ripio (large gravel rocks) and carrying it to the concrete mixer. I saw Jenny, an 18-year-old sign language teacher, using a taladro (electric drill) to help secure a sink in the bathroom. I saw Jesse, a hoe arcing above his head, cutting through the iron-like Ecuadorian grass. I saw Patricio with his head swathed in his shirt, leaning on the handle of his shovel, waiting out a dust storm. I saw Javier, an army officer, painting the rocks which bordered our newly-finished garden with white paint.

“Look at us!” I thought later in the week. A guy from Oregon who happened to be studying Spanish in Ecuador for the summer, a young Ecuadorian woman, and me, a Californian, in a cramped bathroom, painting the walls and sometimes each other. Just good old, one-to-one interaction. If that wasn’t a Kodak moment, I don’t know what was. In strolling around the famous Indian Market in Otavalo, 2 hours north of Quito, I noticed the colorful sweaters, large rugs and, the sweet odor of boiling fruit. Really, the vendors there are successful business people. I was told, many send their children abroad for their college education and themselves travel all over the world. Near Otavalo, were several waterfalls. La Cascada de Peguche, or Peguche Waterfall, is a very commercial waterfall, with tourists and Ecuadorians alike sitting and taking in the spray and rushing sound of water. Our short weekend up north afforded a different perspective on the culture and it only made my bond to this country stronger.

Peggy, the only one of our group with a formal degree in Spanish, found a good quote one morning– “Unless uninterrupted, sleep, health and riches can’t be enjoyed.” For me, going back home felt like an interruption because I had been so accepted by our Ecuadorian hosts and friends. The work had been very hard but on that last day, it hit me, “We’re almost done!” And all I could think about was when I was coming back to Ecuador. 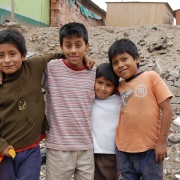