Many indigenous groups live in the Amazon region of Ecuador, including the Huaorani, the Shuar, the Cofán, and the Secoya, to name only some. Prior to the arrival of the Spaniards, the economy of these peoples was based essentially on silviculture and horticulture. They extracted dyes from the achiote plant for face paint and curare poisons for blowgun darts from other plants. These peoples developed complex religious systems, many of which incorporated the use of hallucinogenic plants.

The Shuar are an indigenous people who live in the Amazon rainforest of Ecuador and Peru. The Shuar are renowned both by the scientific community and the public for their shamanistic practices. Until the 1950s the Shuar, were a society of male hunters and female gardeners. To preserve their culture and lands, the Shuar (which today number 40, 000), formed the first ethnic federation in Ecuadorian Amazonia in 1964. Traditionally, they were semi-nomadic, practicing small-scale slash-and-burn agriculture, planting crops (such as yucca and sweet potato), moving on before the soil was depleted. Like other Amazonian groups, Shuar shaman administer ayahuasca, a psychoactive infusion, to reach higher planes of consciousness in spiritual practices. Thanks to the work of the Federation of Shuar centers, Shuar identity is very strong; nevertheless, most Shuar also identify strongly to the Ecuadorian nation-state and have entered Ecuadorian electoral politics. Since the discovery of oil in the upper Amazon, the Shuar have been forced to defend their lands from the collective threat of oil extraction.

Our Ecuador Country Manager, Maggie Bjorklund, visited two Shuar communities in a recent trip to the province of Morona-Santiago in the Ecuadorian Amazon. The first order of the day was to give a formal Shuar welcome. Maggie being welcomed with a Shuar ritual

Following the welcome ritual and a small chat, the Shuar guide, Diego, took us on a walk in the forest, pointing out many plants and what they are used for. Following our guide, who is much more comfortable walking barefoot in the rainforest With the use of medicinal plants, the Shuar medicine man then performed a limpia, or a cleanse, on Maggie to rid her of any bad energy. 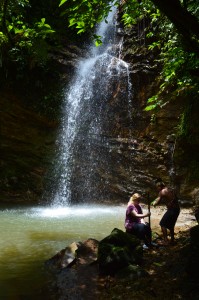 Maggie having a ‘limpia’ done

Following the cleanse, we bathed in the water and swore we had never felt such clean, pristine water before. The view of the surrounding rainforest is indescribable. Bathing in the waterfall Kintia Panki

We then returned to have a delicious lunch of ayanpaco – a traditional Shuar dish of fish, yucca, and plantains cooked in a banana leaf over a wood fire. Eaten with your hands. So healthy. So good. The Shuar hut where lunch was served 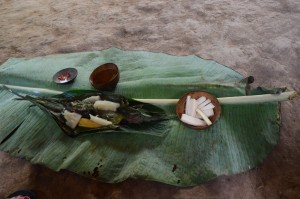 This was truly a wonderful opportunity to learn more about Shuar culture, their struggle to maintain their traditions, and their views on the opportunities for tourism in the region.