Be the Change. Be a Global Volunteer in Nepal.

As a volunteer in Nepal, you’ll help youth and adults overcome the destruction and widespread poverty resulting from the 2015 earthquake.  In Kathmandu’s valley – at an altitude lower than Denver – you can contribute your skills towards the U.N. Sustainable Development Goals. Teach conversational English, help repair living and learning spaces and provide support and training to marginalized women.  See Covid-19 requirements.

Get Started in Nepal

Volunteer in the shadow of the Himalayas.

In small groups of five students or a classrooms of 30, bring basic English skills to impoverished students, and help improve their future education and employment opportunities.

If you enjoy physical activity and light labor, you can help local people brighten a classroom, fix a sink or toilet, repair classroom furniture and improve the safety and utility of community facilities.

Assist with after-school homework, tutor in English, teach music, dance and crafts and serve as mentor of life-long skills.  Work for an hour or two after school and all day on holidays when schools are not in session. Encourage, guide, stimulate and leave your positive impression on a child.

Registration is quick and easy!

Be sure to select all applicable discounts. All payments tax-deductible.

Leave the details to us!

Global Volunteers’ Nepal program officially commences with the evening meal on the first Saturday. Plan your flight to arrive at the Tribhuvan International Airport (airport code KTM) before 6PM. To enter the country, the Department of Immigration provides “Visa on Arrival.”

You must supply us with your flight number and arrival time two weeks before your arrival. Global Volunteers’ representative will meet you outside Customs and transport you and your teammates to the hotel before the 2 PM check-in time. Your team leader will greet you at the hotel and begin orientation. Departure is on the last Saturday of your selected service option.

Rest and comfort for a productive program.

Team lodging is in a secure, new and comfortable hotel in the Thamel tourist district of Kathmandu. The guest rooms are double-occupancy with private bathrooms, showers, hot and cold running water, wi-fi, LED televisions, safety deposit boxes and refrigerators. There is also a health and wellness spa at the hotel.

The team breakfast is at the hotel.  Lunch is at local restaurants near the service project sites. Dinners are at restaurants near the hotel serving authentic Nepali and Chinese cuisine. Pizza and other Western foods are also offered, but with a Nepali touch. Vegetarian diets can generally be accommodated. Purified or bottled water is provided. Volunteers dine together in area restaurants. Nepalese cuisine is varied and healthy. Many meals center around meat and vegetables. 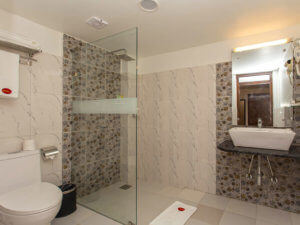 Each room has its own bathroom.

Your safety is our top priority.

Your lodging, food and transportation are provided always with a mind to help you ensure your health, safety and security while volunteering at the work site and in your lodging facilities. Read more about health and safety here.

While there are risks traveling anywhere – read about Travel Risks here – you can minimize risks if you are cautious and follow good health and safety protocols. Malaria risks in Kathmandu are low.  For additional information on staying healthy, review the websites below.

Global Volunteers includes emergency medical evacuation insurance for every volunteer. We also recommend you purchase health insurance that covers you while in Nepal, and trip cancellation insurance in the event you must cancel your participation on the service program. Your travel agent can refer you to travel insurance providers.

Program Mobility:
Accurately assess your functional mobility. Our work assignments and partner communities require varying levels of physical stamina and mobility. After you register, you will be asked about your physical capabilities relating to your mobility. Please answer the questions honestly.

Required Mobility for Nepal: Mobile – Walk 1 mile, climb five flights of stairs, walk on uneven terrain, and get on and off buses and trains independently.

Global Volunteers’ Covid 19 Policy for Service Programs in the U.S. and Abroad

Your team leader is eager to meet you! 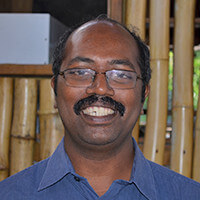 All Global Volunteers service programs are led by experienced team leaders who participate in Global Volunteers extensive team leader training, are experienced in managing diverse groups, and have completed CPR and First Aid training.  Stephen Raja is Global Volunteers’ Nepal Country Manager and team leader. He was born and raised in Bangalore, India, and now lives in Porur. He earned a Bachelor’s Degree in commerce, and owns a tour business in Chennai. Stephen served as our Country Manager and on-site consultant for our India Service Programs until February 2018 when the program was suspended.  He’s highly respected by our Nepalese community partners and his knowledge, patience and ready smile is greatly appreciated by Nepal volunteers. Evenings and weekends are free time for Nepal volunteers and the hotel is in the central tourist area of Kathmandu. There are many shops, cafes and restaurants just outside where you can enjoy free time in the evenings. For example, the Kathmandu Guest House, just a five-minute walk from the hotel, offers a lovely garden sitting area, bar and restaurant. The hotel staff will eagerly advise you of some options to enjoy as a team or individually. Some weekend options include:

Chandragiri Hill which is situated at an altitude of 8,333 (2540m) is the picturesque hill station of Kathmandu Valley. Seven km from the Kathmandu Valley, there are restaurants, cable cars, resorts, branded shops, and multipurpose hall at Chandragiri Hill. The cable car runs from 8:00 AM to 5:00 PM during the week and 7:00 AM to 6:00 PM on public holidays and weekends.

The oldest shrine complex in the Kathmandu Valley, Swayambhunath Temple was said to have been built over 2,000 years ago. Situated at the top of a winding staircase, “Monkey Temple” has one of the city’s best panoramic views. The complex, containing multiple shrines and a stupa, is considered holy to both Buddhists and Hindus.

Durbar Square, or palace square, is the UNESCO-listed heart of Kathmandu’s Old City.  Located in the heart of Kathmandu, this vibrant public square was once the Kathmandu Kingdom royal residence. It has one of the world’s highest concentrations of well-preserved ancient buildings, making for a stunning open-air museum. Although the square was damaged during the 2015 earthquakes, there is still an array of architectural gems to see.

BoudhaNath Stupa is one of the largest Buddhist stupas in the world, and a major pilgrimage point near Kathmandu. Every day, Buddhists fill the square to light incense, turn prayer wheels, and perform kora—clockwise circumambulations—around the monument. Rebuilt after the 2015 earthquake, the stupa is one of Nepal’s most visited attractions.

Bhaktapur, once medieval Kathmandu Valley’s seat of power, earns its accolade as Nepal’s best-preserved city. The earthquake of 2015 claimed many historic buildings, but the one-time flourishing kingdom is still packed with old-world charm. Durbar Square, a UNESCO World Heritage Site and heart of the city, is well-worth a visit.

Changu Narayan Temple, located within easy reach of the town of Bhaktapur in the Kathmandu Valley, has a history as a sacred site dating to the third century AD, though the double roofed temple that stands in honor of the god Vishnu today was erected after a fire in 1702. Some of the statuary contained within the temple date to the fourth through ninth centuries.

Several tour agencies offer daily flights to see the top of Everest – without the climb. The cost is about $200-250 per person and only takes place in the early morning (5:00 AM arrival at the airport for the 6:00 AM flight). An example of such a tour is here.

Nepal is for family volunteering. Families of various compositions with children 13 and older serve with us in Nepal: Parents and teens, grandparents and grandchildren, aunts, uncles and nephews and nieces all are welcome. The contrast of life in a Nepali school or children’s home with your teen’s own life comes up time and again as the greatest lesson for all.

Minor volunteers can teach in classrooms, mentor preschoolers, paint and clean facilities and play sports with local teens. Parents and guardians are expected to supervise their teenage volunteers, and collaborate with our staff and local partners to maximize the service experience for everyone. Youth are invited to offer their own perspectives in team meetings and fully participate in free-time activities. In this way, your teen gains a personal understanding of the Nepal culture as well as the role and responsibilities of being a team member. They likely also will create life-long friendships with other volunteers and local students who share their interests and experiences – and make a permanent impression on all who serve. Student, professional, religious, corporate and community groups are warmly welcomed by the open-hearted Nepali people. Because of the wide variety of volunteer projects, every member of your group can apply their unique skills and interests in meaningful service. Learn about each other in a non-traditional way as an intact volunteer team, and know that your specific contributions to genuine community development projects advance the futures of impoverished Nepali children and women.

Educators and student teachers, social workers, and anyone with a child-care background (including parents!) can find a direct way to mentor and support children in classrooms. Trades professionals, carpenters, plumbers, and painters – anyone who can work with their hands – are needed to help repair and maintain classrooms and community buildings. Best of all – comparing notes with your teammates at the end of the day in your comfortable hotel, you reflect on the contributions you’ve made and the remarkable culture you’re experiencing together.

Details on group volunteering in Nepal

“Nepal is an amazing country filled with amazing people. A warmer and more friendly people you will not find anywhere on the planet.”

“Volunteers can make a significant difference in the arc of Nepal’s children’s lives. What’s more, they’ll fall in love with these beautiful dark-eyed, bright-smiling children. ”

“English is the international language of opportunity.That truth is remarkably relevant in Nepal. “

Volunteer Voices: Read and Hear About Serving in Nepal.