Message of the Day: Treasure family & friends, respect everyone, work for harmony and peace.  Anonymous The Terracotta Warriors Museum in Xi’an

Saturday:  Carolyn & Jo-Carol departed with their High Tech hosts to visit the site of the tomb excavation of Emperor Qin from whose name CHINA is derived.  In the early 1980’s the now famous terra cotta warriors were first seen.  Now this United Nations’ Heritage & education site is a major cultural attraction. Seeing these unique warrior figures in such vast numbers is awesome.  There is great speculation about the contents of the actual tomb chambers — and I hope I am around to learn about it. Carolyn & Jo-Carol were next treated to a lavish and delectable luncheon. Mary & Claudia hailed a cab and were driven to the Shaanxi Province History Museum.  Although the plaza in front of the museum was packed with tour groups, we followed advice to pay a small fee and gained quick admittance. Various exhibition halls displayed major discoveries from the Neolithic period thru multiple dynasties.  I especially liked the pottery pieces depicting palace servants and the humorous representation of early Western ‘visitors & tradesmen’ entering China via the Silk Road.  The ancient artifacts were often complemented by written and pictographic explanations (some in English) which I found very useful.  It was interesting to see Chinese students, typed notes in hand, straining to hear their teacher discussing the exhibits.  Mary commented on a lantern shaped like a goose which included a chamber that would have held water to filter the smoke.  We both thought some of the earliest pottery painting designs could have passed as those from early native American decorations. Items displayed at the Shaanxi Provicial History Museum in Xi’an

Escaping the crowd, Mary & I had a snack at a patisserie and returned to the hotel.  I found a China Daily weekend edition and spent an hour reading & relaxing. Later I visited with 3 university students who were helping register delegates for a convention in our hotel and who wanted to practice their English.

Sunday: Vacationers mobbed the hotel breakfast bars. Patience was called for as Westerners & Chinese jostled for a wide variety of dishes. I tried the fried squid ‘circles’ & thought they were quite tasty. Mary headed off for the Muslim market, traversing the main street and selecting gifts. I took a walk in the hotel area and found a small group of Tai Chi players who invited me to join them.  Jo-Carol was ecstatic to find that her lost item had been found thru the combined efforts of her host teachers, Baoli and the responsible action of yesterday’s restaurant personnel. 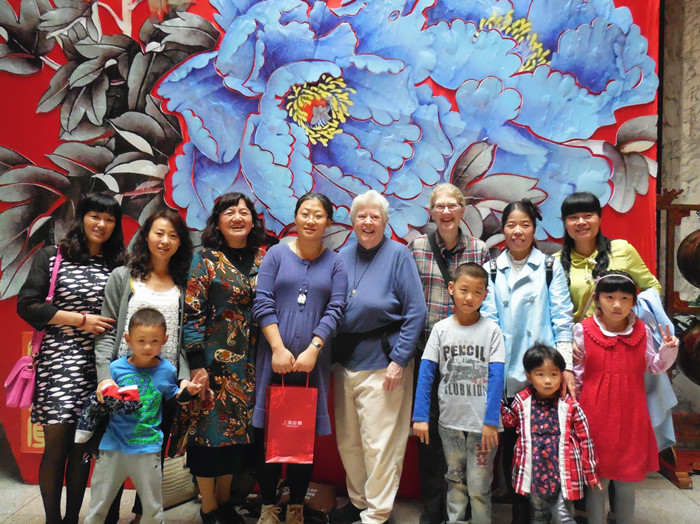 Volunteer Caludia and Mary visit with their Chinese teacher friends

Just as we were preparing for our afternoon activities, we were delighted to see guests arriving at the hotel for a wedding.  Soon the bride appeared and hurried to greet her guests. BaoLi told us that a civil service had previously occurred & the party was to announce and celebrate the wedding event.

Jo-Carol & Carolyn left for the Muslim market, the Bell & Drum towers while Mary & Claudia greeted their XBMT college friends from previous years.  As Global Volunteers we take great pleasure in working with teachers as well as students.  Mary & I felt quite honored that 4 of the teachers we know from previous years, who live and work in Xi’an wanted to visit with us.  Vivian, Helen, Fisher, and Swallow (former English teachers at XBTC) all brought their children. Baoli and her son and Julia Dong (XBTC administrator) joined us & we all enjoyed an extravagant meal at a local restaurant. It was terrific to hear about our friends’ families, jobs, plans, and to interact with their vivacious children.  It was hard to say goodbye.

At dinner BaoLi and Team 218 reviewed our team goals and assessed our progress. We shared teaching activities and discussed some cultural differences.  We all agreed that our 1st week had been successful and that we look forward to another exciting week.