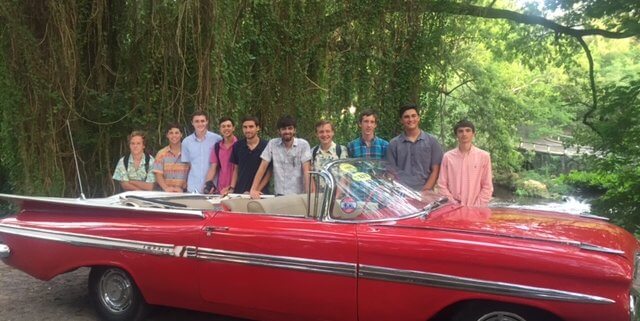 A Boy Scout troop recently went on a great adventure to Cuba. Michael, one of the leaders, tells us how Boy Scouts explore, serve, and learn in Cuba.

How do you end up in Cuba?

Boy Scouts are known for their commitment to service and their love for adventure. But Boy Scout Troop 845, from Chapel Hill, North Carolina wanted to take it a step further. The boys from the troop thought it would be great for them to explore and serve at a place where not everyone goes, something uncommon. At the time there were good news about the opening of relations between the U.S. and Cuba – which among other thing meant cheaper flight tickets. So the boys went for it. They talked their parents into it, and soon they had a team of adult leaders on board: John, Michael, and Thomas. All that sounds great, but going to Cuba is not that simple.

The group realized that there was paperwork to fill out, and there were concerns about safety and finding a flexible program. So they started to look for an agency or organization that could help them with all that. Soon enough they found Global Volunteers, which offered them just what they needed and made things a lot easier for them. With everything ready, they took advantage of the summer vacations and went to Cuba on August.

“People in other communities have a completely different culture, but they are very similar to us at the same time.”

A note about the Castro regime

“Castro was obviously a strong figure in Cuba. You could see a lot of propaganda about the regime in the streets. But it was surprising to us how open the people there were open to conversations about this. Some people were negative about it and pointed out to all the challenges the regime brought, while others were positive and mentioned the benefits. The recent events in Cuba have created an opportunity to turn the page and work in a closer and friendlier relationship with Cuba.”

Michael believes that this kind of collaborative experience between the Cuban People and Americans only opens up the lines of communication and understanding between them. Overall, it was a great experience for them. Boy Scouts explore, serve, and learn in Cuba:

“We did enjoy everything Global Volunteers did for us. We selected them because we were looking for flexibility. And our team leader, Jennifer, was a great in everything.”

“There were many times were the service program felt like an amazing adventure, other times like work, and yet others like vacations. The combinations of these three made for a wonderful experience. I would recommend it to anyone who is looking for a challenge, an adventure, and wants time to learn and to grow.”

Boy scout troop 845 at a local library in Cuba.