We woke up and had breakfast in the hotel. Then we walked to the Colegio. We walked to the principal’s office where we were greeted by Karen. She took us around to each classroom and answered all of our questions. After we saw the classrooms, we moved on to the farm. We saw the dairy (which later in the day we would clean). The women in the cafeteria gave us some fruit – pineapple, papaya, watermelon, and bananas – as a snack. The group went to the pig pens. There we saw the largest pig any of us has ever seen and some little piglets. Following we saw the hens. Maggie told Justin and me about how they are called hen’s eggs in Spanish and people used to laugh at her when she was learning Spanish and said chicken eggs.

After the tour we went to lunch at the soda. My mother and I had a lunch of beef, rice, beans, and salad. Justin and Maggie had fish, rice, beans, and salad. Justin was wearing very nice clothes (he looked very presentable for introductions) so he and Maggie went back to the hotel to change. Then we went to Jorge’s classroom. There we did introductions with the students. Three students came with our team to power wash and clean the dairy building. We began one wall at a time. We began to clean some of the inner walls as well as the sides and back of the building. After that we mopped the floor and swept the excess water into the gutter. Don Chepe brought in the cows so he could milk them. I was quite excited when I was able to actually milk a cow as well. After the team had all had a chance to milk the cows, we saw where it was stored and we saw the fresh cheese they made every day, but we didn’t eat it. Cows comin’ in to be milked Lena having a go! 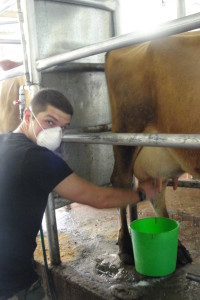 And, of course, Justin

Proceeding we went back to Jorge’s classroom. With his eight grade class we went up and helped them plant cilantro in the beds. We turned the soil and drew lines in the dirt for the seeds to be planted in. The teacher then left for a meeting with parents and we had a chance to interact with the students. Working in the vegetable garden

Justin tried to teach everyone (wih Maggie translating) the Rubik’s cube. We had an early dinner of rice, beans, cauliflower, carrots, and chicken. Maggie left her phone in her room, so Franciso came to see if we were alright. They needed to discuss the plans for tomorrow.

We then went on a night tour at the coffee and chocolate plantation as a team. We learned that the coffee berries have four layers and how to remove each layer. We also learned about cocoa beans. Then we had a discussion about the difference between light roast coffee and dark roast. Light roast has more caffeine, but also has more flavor. Dark roast has a bitter taste because it is dried for longer. Afterwards we were given samples of coffee and the best-tasting chocolate in the entire world. They were so nice and gave us extra chocolate. The night tour followed and we saw sloths, millipedes, spiders, crickets, and toads, and we heard a frog we couldn’t see. We saw a banana tree and a few bananas dropped so we were able to eat them. I told the tour guide, “Your friend says he likes dark roasted coffee best.” He replied, “He also might drink it with milk. He is part of the 99%.” The day was full of lasting memories and we were able to complete many of our goals in the first day. The deliciousness that we got to taste!

First Day of English Classes!Feeling spoiled by our team leader in Costa Rica
Scroll to top