Team 227 woke up to a rainy morning on Friday, the final day of service for the California Contingent. Watching our Team Members sit down to enjoy our first bite of breakfast at 7:00 a.m. sharp was a thing of beauty, though young Master Haiden was delayed by the onset of a cold and the need to get a few minutes more of sleep.

We had our last team meeting of the week and as we reviewed the plans for the day I once again read through the Team Goals we all listed on the wall poster. In my opinion, we absolutely accomplished all of the goals listed as the week passed on and the time and effort spent here transformed into a series of fond memories we will all likely never forget.

After breakfast we walked down the hill to the Colegio one last time, and my mind skipped ahead to the point when we would say goodbye to everyone there at the end of the day. It’s amazing how much you can experience in a week’s time, and how quickly bonds can be built. I knew it would be hard leaving at the end of the day knowing it was likely we would never see these people again. We got to school and met in Profe Jorge’s room and the music was already playing from the stereo inside. For a moment I wondered if maybe the Salsa Party we had enjoyed the afternoon before had continued on all night without us? Once we all got seated Profe Jorge welcomed us once again and Maggie led the group through our introductions and EVERYBODY handled it flawlessly! We divided into two groups – one to help set up a stage in the refurbished gymnasium for the upcoming talent show, and the other to continue with the new landscaping in the upper campus flower boxes. The planting we had done the day before looked very nice and the newly planted flora seemed to be right at home at the Colegio. 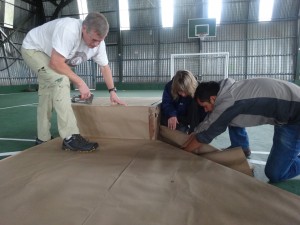 In the gym we took the triangular-shaped plywood boxes that yesterday substituted for a few stepladders while the basketball hoop was installed and assembled them into what would serve as the stage. They didn’t look like much and I could picture lots of splintered feet, but Profe Sergio began unrolling thick packaging paper to staple in place over the plywood and by the time it was completely covered, the stage looked pretty nice! Next came the creation of the stage curtain, assembled by installing a pole attached to the volleyball stands and long lengths of silky white sheet material, and some letters strung together to label the talent show and the job was complete!

As we worked with the modest resources at the school, I was once again impressed with the ability of the faculty and students to “make do” with what they had, and how valued something as small as a safety pin is when you don’t have as much to work with as we are used to in the U.S.A.

Once the project was complete, we joined the rest of the team for a special farewell lunch in the cafeteria, and Austin invited himself to play in the school band when we were done. One would hardly have noticed that he wasn’t a regular drummer with the enthusiastic response from the other kids. We then had one last gathering in Profe Jorge’s room where the students and the Vice Principal, Harold, awarded us with certificates of appreciation and some gracious farewell thank you’s.

We took a few last photos and said goodbye to the school and fine people of the Colegio. The rest of the team worked through the afternoon and we went on to enjoy the town of Santa Elena before shipping out tomorrow.

Messages of the Day – Isabelle & Kevin: “The best things are nearest: breath in your nostrils, light in your eyes, flowers at your feet, duties at your hand, the path of God just before you. Then do not grasp at the stars, but do life’s plain common work as it comes certain that daily duties and daily bread are the sweetest things of life.” – Robert Louis Stevenson Starting our service in Costa Rica

Highlights from Our Time in Costa Rica
Scroll to top