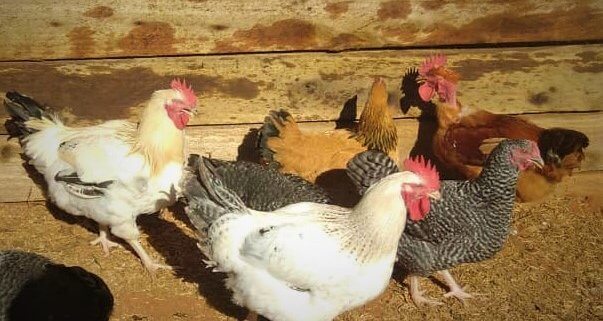 The next step in improving nutrition and decreasing stunting through the Tanzania Reaching Children’s Potential (RCP) program launched with the sound of chickens clucking in their coop. Raising the birds by RCP families is a development and fundraising goal for Global Volunteers’ model chicken coop project. Melinda Gates, Co-chair and Trustee of the Bill and Melinda Gates Foundation, promotes raising and selling chickens as powerful enterprise for families in the developing world. In this interview, Husna Wasiri, Global Volunteers’ RCP Program Coordinator and Technology Manager, explains how chicken and egg production increases with this new project in the RCP villages of the Ukwega Ward in Tanzania.

What’s the need for chicken coops in the Ukwega Ward?

Protein is the most expensive component of the diet. Many families in Ukwega ward do not have a source of protein, and they must buy eggs and chicken to feed their families. But most don’t have money and don’t get enough protein in their diets. Chicken and egg production is a powerful investment because chickens are easy and inexpensive to maintain, are an excellent source of protein for family diets, produce fertilizer, and are a source of income. Moreover, because raising chickens for profit is most often done by village women, that income often is transferred into improved child nutrition, health and education, according to the U.N. WomenWatch organization.

People need education about this and then behavior change to consume enough nutrients for their children to stay away from stunting. The families must be able to afford to eat eggs instead of selling them. When we support the families in Ukwega ward by educating them by having a model chicken coop they can learn from, they will have more chickens and eggs for their families.

The plan is to help the families have their own source of protein from chickens and eggs. We hope to supply each RCP family with a chicken coop and 25 chicks with feed. We will help families maintain and care for the chicks in the same manner as any other RCP technology.  This will provide each family a chicken and egg production operation to supply sufficient protein for the entire family. The RCP staff first is learning how to manage chicken coops so we can teach families the importance of raising chickens, specifically: What are the challenges, different diseases, medicine, feeding needs, and many other subjects. This will help us understand what we need to know to introduce the project to the families. We expect the chickens will start to produce eggs soon, and also to produce chicks from the eggs so we’ll have more chickens.

“When we introduce any project in our RCP Program, we expect positive results.“

The purpose of a chicken coop is to protect chickens from bad weather and predators, and to keep the eggs in one place. Further, a coop provides proper laying space so hens will produce more eggs. At the end of our training, Global Volunteers will decide what support families need to succeed with chicken coops, according to the goal of providing essential services for nutrition.

How many families in the Ward currently keep chickens?  How successful are they in chicken and egg production?

Do families who keep chickens primarily use the eggs for themselves, or do they instead raise chicks for sale?

Many families keep chickens primarily to sell eggs and chicken instead of eating them or keeping eggs for themselves and their children. I think this is because they can’t afford to meet their basic needs, so they sell chicken and eggs to have money. This is their dilemma. They have been blessed with lots of productive land but they dont have money to afford other needs, so it may happen they sell all of their harvest so that they can get money. And the result is they don’t have enough food for themselves.

What are the primary features in successful chicken and egg production?

We built a small house where the birds are kept safe and secure. It has an indoor area where the chickens can sleep as well as a fenced-in outdoor area where they feed and spend the majority of the day. This way, they will also stay away from other chickens so they won’t get infected. The coop is cleaned every day, most especially every week. At night, we lock the chicken coop with all the chickens inside to protect them from predators.

What are your personal hopes for the model chicken coop project?

We are expecting to have eggs next month. We also want to produce chicks so that the project can expand. We will sell some of the chickens so we can continue buy food, medicine and vaccination for them. As the chicken and egg production increases, we’ll enlarge the coop for more chicks. When we introduce any project in our RCP Program, we expect positive results. The success we get from technologies gives us hope to introduce more projects as we work hand-in-hand with families who want to improve their children’s lives.

How many RCP families are interested in chicken and egg production?

Many families keep on asking when are we going to provide the chicken coops. What we’re telling them is that the RCP staff is learning, as we did with the EarthBoxes. Now, we have those gardens in most RCP homes. We will train them in the same way on how to keep and raise chickens in coops. We will install them strategically in the villages so the families will be able to observe how to maintain them. It will be a cooperative learning and production process so eventually all RCP families can have them.

One mother who currently raises chickens is Sesiana Duma, who joined the RCP Program in 2017. She is 32 years old, and she and her husband have three children. She currently keeps 10 chickens in her chicken coop. When the community’s chickens fell ill in March, they locked their own birds inside the coop for almost two months to protect them. The chickens are very valuable to their family. The eggs and meat are important to their diet, and also their income. She says they can sell one chicken for 10,000 – 15,000 TSh ($4.30 to $6.50). By comparison, a pound of white rice in the city sells for about 1,100 Tsh, a pound of tomatoes is 1,150Tsh, and a 1.5 liter bottle of water is 1,110TSh.

Sesiana says they currently don’t have enough knowledge about how to protect their chickens from disease. They know they must vaccinate them, and buy medicine for them if they do get sick. But, they don’t have reliable information. She says many times they use home remedies, but know that modern medicine will be more helpful. They also want to know how to build an enclosure around their coop to keep other chickens away from their own. So, they look forward to learning from the model chicken coop project how to be more successful.

Another RCP mother, 30-year-old Kijaneth Kitule, tried to raise chickens, but her birds were stolen from her open kitchen. She and her husband are raising six children, and are very eager to build a chicken coop so they can sell eggs and chicks as well as producing food and fertilizer for the family. “Sometimes you will find yourself in a position that you don’t have money to buy even food for your family,” Kijaneth said, “and you have chicken, but the only option you have is to sell the chicken so that you can get money. So sometimes it is our poverty that forces us to not enjoy our hard work.” She said they can’t afford now to build a chicken coop, but until they can, the RCP model chicken coop program can teach her how to vaccinate and feed any new birds they acquire, and will eventually provide them “a modern chicken house so they can be in a safe place.”

Asilia Kipemba, a pregnant 24-year-old RCP mother of two, says she also worries about keeping her three chickens safe and healthy in her open kitchen. She would like to raise more birds if she knew she could protect them because eggs in her family’s diet is important, and selling eggs is a source of income for other basic needs.

To learn more about the important of chicken and egg production in the developing world, read Bill Gates Launches Chicken Initiative to Tackle Poverty in Africa and The Small Animal That’s Making a Big Difference for Women in the Developing World

Happy Healthy Birthdays for These RCP Children in June, 2020!
Scroll to top