Peru Country manager Daniel Salazar talks about Myths and Legends of Peru and tells us the Legend of Manco Capac and Mama Ocllo.

One of the most interesting things to hear in a place you are visiting is the local myths and legends. This specially true in countries like Peru or Ecuador, the land of a the Inca empire, the largest empire in pre-Columbian America. Although a great empire, the Incas lacked a written record of their history. But they left us with myriad of awesome myths and legends which we would like to share as you prepare to visit this culturally rich country.

The Legend of Manco Capac and Mama Ocllo, also known as the Legend of Lake Titicaca, was first recorded by Inca Garcilaso de la Vega, the son of an Spaniard captain and the granddaughter of an Inca Emperor. It was from her side of the family where Garcilaso learned many Inca legends. Lake Titticaca as of today, in Puno, Peru. People live in man-made floating islands like this one in Lake Titicaca.

In the land around Lake Titicaca (Peru and Bolivia), men lived like savages and had no religion, law, or any other form of organization. They lived in caves, gathered and hunted for food, and walked around naked as they didn’t know how to make clothes. So the god Inti (sun) had pity on them and sent his son Ayar Manco or Manco Capac and his daughter Mama Ocllo to civilize these people and form an empire that would honor him.

Mountains around the Cuzco valley where Manco Capac sank the goldenrod.

Manco Capac taught men to live in society, praise Inti, fish, build houses, agriculture, etc., while Mama Ocllo taught women to weave and do domestic chores. In the end, out of these newly civilized people the Inca Empire was born.

While this is only one of many myths and legends of Peru, it is one of the most famous as it talks about the origin of the Incas. Also, it’s great because its setting is right there for you to visit before or after your service program in Peru.

Check out some of the pictures of Cuzco below, as it looks today, and then just sing up for a Peru service program. Cuzco streets as of today. 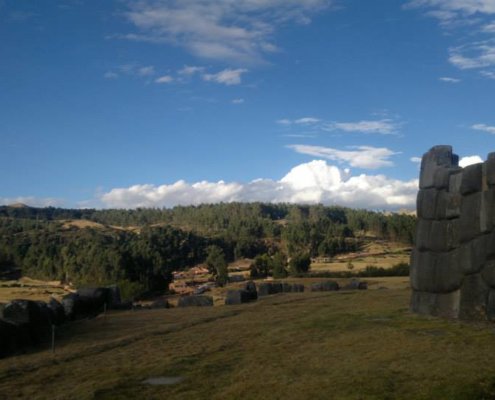 Why Solo Volunteer Travel Is So Fulfilling

The Best Volunteer Gig in the World
Scroll to top