Volunteer Esther talks about her experience teaching English in Reymontowka, Poland, and concludes: “Reymontowka Will Linger in Our Hearts”

The final day of a Global Volunteers’ service program is always bittersweet. While looking forward to returning home, we also are sad to leave new friends among the volunteers, camp staff and campers. Our students reported that many were in tears last night (their last program without parents), particularly those who know that this will be their last year at Reymontowka. One of the young men in my class exclaimed, “I LOVE this place!”
The first part of the morning was spent with our individual classes. My class played a spirited game of “Apples to Apples” and rehearsed our songs for the evening program.
Third period the whole camp participated in a numbers game, a bit like Musical Chairs in reverse, and dancing. The campers had a variety of choices for our last period – several crafts and games. I attempted 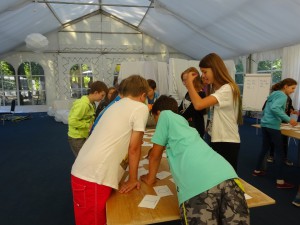 to teach some Origami to four (very patient) boys, but the items I had made earlier in the week didn’t seem to come together in the same way. I sent them home with the instructions and “as much paper as they wanted” with the hopes that they’ll be able to figure this out for themselves.
Lunch included roast chicken, brussel sprouts, mushroom soup, potato puffs, and salad. A camper visited us and demonstrated his ability to recite the 50 states in alphabetical order (something none of us could do). By 6:00, parents and siblings had arrived to form an enthusiastic audience for the campers’ performances. Our classes presented us with t-shirts and farewell greetings, and all camp staff were introduced and thanked. Each class presented a song or skit. Highlights were “Goldilocks and the Three Bears” (with alternate endings), “Hit the Road Jack”, songs from “Frozen”, and several pop/rap songs. Finally, the entire crew presented an original musical in both English and Polish – complete with dancing pirates and birds (they don’t have mouths, they have beaks!)
Everyone was invited for grilled kielbasa and socializing. I met several of my students’ parents and siblings. I told them how smart, talented and delightful their children were.
Once the campers and their families left, the manor house became unusually quiet. Tomorrow we all leave (early!) for the airport, for more sightseeing, or to visit Polish friends. Like our campers, Reymontowka will linger in our hearts.

“I was no longer a tourist. I was part of the community.”