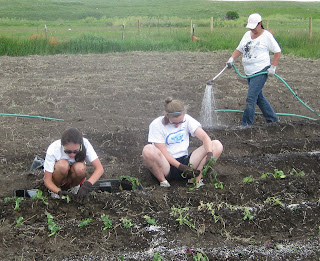 Today our team split up into four work groups. Ally worked at the Blackfeet Community College library, where she continued cataloguing and helping the librarian with whatever she needed. Hannah, Tee, Sam and Leah went to the Care Center to continue scraping and painting the outside walls and assembling picnic tables for the residents. As they painted a fresh layer of paint onto the office walls, they painted themselves in the process! They also got to interact with more local workers than they did the day before.

The third group started as two separate groups, and joined after lunch. Ned and Maia worked with Charles at the Blackfeet Academy shoveling and raking dirt for the new garden along with getting to know Charles better. After lunch, they joined Jessica and Molly at the community garden and greenhouse where they planted carrots, zucchini, beets, peas, swiss chard and summer squash with a local crew. They also watered and fertilized the vegetables. Shirley Wippert, one of the local workers, showed us how to keep animals away from the freshly planted veggies by lining the side of the garden with clear water bottles. We also planted onions at the end of every row, which drove the small animals away because of their strong smell — too overwhelming for them. We worked with Shirley, Crystal, another woman and her two young sons.

As we worked in the sun for the for the better part of six hours, we got to learn more about their culture, and they were eager to hear about our time on the reservation and our college plans for next year. There were long periods where no one would speak, but the silence was equally as comforting as the friendly conversations.

The wind blew for most of the day, and we listened to the gentle hum of the wind turbine that powered the office behind us. The hot sun reminded us how Sam Aimsback from the rodeo grounds told us yesterday that the rainbow around the setting sun meant either a very cold day or very hot day ahead. His words proved to be true as the sun continued to beat on us for the remainder of the afternoon…making this the warmest day since we got here.

Not an Ordinary DayMen achieve certain greatness unawares, when working to another aim
Scroll to top