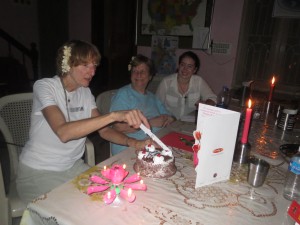 We had breakfast then prepared for the morning at Christ King. Sheeba put jasmine flowers in our hair and put a bindi on our forehead. I felt so special and smelled so nice. Today we are responsible for the entire class period (1 hour each).

We started with the 5th grade class. The children greeted us with a Good Morning song. I led the class in a bunny-bunny-bunny warm-up then started reviewing time with them and drew a clock on the board that we used to show different times of the day. We also had the students calculate the number of minutes between two different times. Fran challenged them with more difficult questions, such as how long does it take to get from her house to the Grand Canyon if she leaves at 7:30 am and arrives at 5:15 pm. Fran brought her ipad so she could integrate pictures of her home and other places in the United States with time concepts, English and science. Dehvan finished with the letter game – the word has to begin with the last letter of the prior word. The time went quickly, and we said goodbye before going to the 4th grade class. The 4th grade class also welcomed us with a song. I started with a few songs, such as “BINGO”, “Teddy Bear, Teddy Bear”, then I wrote a few sentences on the board and asked the class to help me identify nouns and verbs. I gave them a worksheet to match action verbs with the correct object, such as clean the house. Fran continued to work with them on verb tenses. Dehvan reviewed odd and even numbers, then challenged the students to some addition and subtraction problems. We ended with a few songs, “No More Monkeys Jumping on the Bed”, “If You’re Happy and You Know it”, and Fran began to teach them Kookaburra and showed them a picture on her ipad. The class ended with a Thanksgiving prayer led by the teacher.

We went to the Guest House for lunch, then went shopping in Chennai. Sheeba went with us to lead and guide us. After we returned from shopping, Dehvan walked with me to buy a cake for my birthday. We went to SEAM for one-on-one sessions with the boys. Near the end of the session, it started to pour. We kept the children with us and played some games until the thunder and lightning stopped because of all the standing water that we had to walk through to get downstairs.

We returned to the Guest House and had dinner by candlelight because there was no power. After dinner everyone sang Happy Birthday to me, and I lit an amazing lotus candle that played Happy Birthday until Sheeba thankfully broke the connection. The birthday card was the biggest card that I ever received, and the rose is so beautiful. I put it in water, and it is sitting on our dining room table. Everyone made this an extra special day for me, and a birthday celebration that I will always remember.