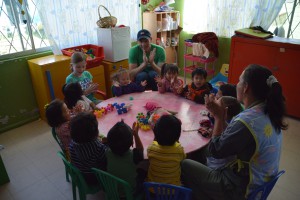 It has been said that wherever you go becomes a part of you somehow. While listening to people talk about their experiences today, I was reminded of that quote. And, while listening to some of my new friends talk over dinner, one word kept coming to mind…connections.

Connections revisited between Katie, Tom, Tía Alexandra, and the children of Center One, as Katie spent the morning renewing the friendships she’d made with these children and tías last year and Tom continued his support and commitment to this center and its people by working hard to improve the building.

Connections made between the rest of the remaining members of this team and the community of Calderón as we walked through the neighborhood on the way to Center Two, with Maggie generously taking the time to introduce us to new foods at the outdoor market and explaining the sights along the way.

Connections made between us and the kids and tías of Center Two as we walked in to the center amidst loud music, dancing children and tías, and lots of smiling and laughing, as many of us joined in the fun. Connections made between Martin and the three-year-olds in Tia Katy’s room while bonding over a bilingual version if an ever-popular Richard Scarry book, developing language skills, playing entertaining and educational games, and most importantly, building a love of books and a sense of community in this classroom.

Connections made between Mia and Tía Katy as Katy artistically created a new style in Mia’s hair.

Connections made between Amelia, Sarah, and Juliann, and many of the tías while enjoying multiple lively rounds of “Heads, Shoulders, Knees, and Toes” during the late afternoon English lesson.

Connections made between Caitlin and Tía Lorena during a discussion the two of them had in which, to use Caitlin’s words, “the conversation flowed, ” in spite of the inherent language barriers.

Connections made between Lily and Eloise and their adorable toddler charges as Lily eagerly requested abrazos (hugs) of each child as he/she left at the end of the day, and Lily and Eloise both arguing over who was going to hold the hand of Kimberly, the last child to be picked up, as they walked her to her mother.

Connections made between me (Laurie) and Tía Fernanda as we shared a special moment as the kids napped by looking at photos and postcards of California, and talking about our families. 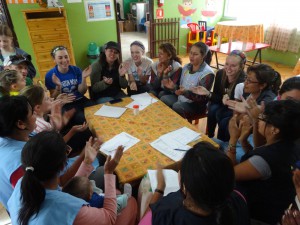 And, lastly, connections made between Kay, Kirsten, Michael, Julianne, Lily, Eloise, Sarah, and some committed community members while painting the newly designed mural and completing the white washing of the wall. This connection – so important – that will be a reminder to us and this community of the threads that bind us all.

Message of the Day – Maggie Bjorklund: “I expect to pass through life but once.  If therefore, there be any kindness I can show, or any good thing I can do to any fellow being, let me do it now, and not defer or neglect it, as I shall not pass this way again.” – William Penn Our last day of teaching in Kunming- a somewhat bittersweet day

Memories of Ecuador Live Bright Within Us
Scroll to top