Global Volunteers assists local farmers in our partner community of Ciego de Avila.  On our inaugural service program in May, 2015, volunteers worked alongside paid community laborers on weeding and harvesting produce at “Garden Number 2.”  (Read “Being a Farmer In Cuba” on one volunteer’s blog.)  The vegetables are provided to childcare centers and sold to community members at substantially below market costs. On upcoming programs, volunteers will also assist in other areas of the volunteer’s expertise,  such as plant disease prevention, using improved seeds,  and the like. 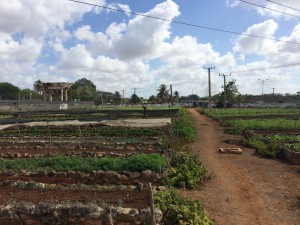 The Director of Gardens for the 22 municipalities in this province is Julio, and he visits each garden every week.  Every seven farms has a representative to the cooperative.   Each farmer decides what s/he will plant – for example, onions, cucumbers and carrots – and is paid a salary.   At monthly meetings, and again at the end of the year, they tally each farmer’s production, and are paid as a group an amount based on output.  The group decides how to divide the amount among the seven growers, and seven support staff – store person, bookkeeper, night watchman etc.

A bit of history:  After the Revolution, the new Cuban government adopted land reforms based on the Soviet philosophy that large, heavily mechanized State farms would increase efficiency and thereby elevate the dignity of human labor. But socialized farming ultimately reduced production and drove many rural families to urban areas – where educational and employment opportunities  promised new futures. This lured the next generation out of the agricultural sector and rural areas entirely – further increasing the dependency on mechanized agricultural production. The U.S. embargo has made it far more expensive for Cuba to achieve high production in food and agricultural exports. Meanwhile, the Cuban government has embraced biodiversity in modern farming – steering the national agricultural practice away from dependency upon unsustainable elements such as expensive technology and imported chemicals. Cuba is now one of the world leaders in bio-fertilizers, with high production of organic food. This has breathed new life into rural communities and help stem rural migration to urban areas. Cuban farmers and researchers are combining traditional and alternative technologies in food production as they hope to reach their ultimate goal of total sustainability.

Wednesday – We Are Blessed!Helping as Many Students as We Can
Scroll to top