Message of the Day: “God grant me the serenity to accept the things I cannot change.. the courage to change the things I can…and the wisdom to know the difference”.  Shared by Greg

Our team of early risers had breakfast of  apple fritters (racuchy) and lots of coffee. After  the meeting and  Message of the Day and journal was read, it was off to join another exciting day of teaching. We each seemed to have an armful of material and lots of hope this would be  a good indication of what the students would be learning. In the  fourth hour, there was a wonderful presentation  by Jan (one half of the Greg and Jan clan from San Diego). We saw a variety of videos of  California including the San Diego Zoo, products grown there, a mountain bike ride, and some yoga poses of the presenter herself. This was followed by a sing-along of “This land is my land” and “Waving Flag” with the children.
After lunch, Jan, Norina, and myself walked to Kotun—and on the way admiring  the homes and gardens. On the way back, out of nowhere we heard the sound of jets,   and looked up and saw about twelve jets. They could have been from NATO but we do not know… but it was quite a sight.
Tonight we were treated to a Polish night, which began with the Polish national dance, continuing with a visual and spoken history of Poland with a short film, then the traditional bread and salt followed by the dream about Warsaw song that everyone  knew the words for  and a biography in English of historical Polish men and women including Marie Curie and Reymont who won the Nobel  prize for the book ‘Peasants’. 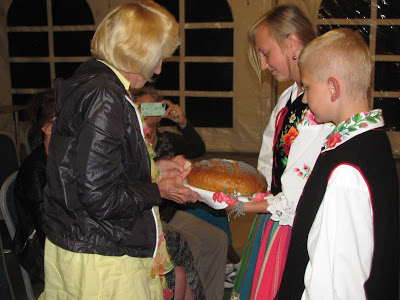 The evening continued with the presentation of a gift of stone with the Polish flag and date, to each volunteer, made by the children  themselves, then each one of us had to say a tongue twister in the Polish language. “I love you Poland” was the final song by the group, after which we were treated to a National treat of bread, lard  and pickles.We are very proud of them for putting on such a great show of their heritage.
Journal by Brenda