Moses and Zamuda on their wedding day in Pommern.

Our friend and Global Volunteer program assistant Moses Kifyasi has married Zamuda  Mgaya.  On this occasion, it is interesting to describe our practice of a dowry before a marriage can be permitted.  This is my experience as a life-long villager in Pommern.

When deciding a dowry in this community [The Hehe and Bena], the practice is of very great importance when a man is to marry a wife.  When the gentleman plans get to married, he first reports to his parents about the matter for approval. The parents  in turn invite a number of relatives and very close friends to discuss the matter and advise the gentleman.  When the family members at the meeting support  the idea, it entails that the betrothed and her family members are  accepted to form a big family altogether. 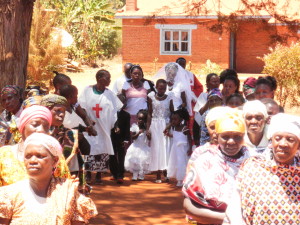 A letter of application gets written to the girl’s parents with some Tanzanians shillings in the envelope. Two people[a man and a lady] gets chosen to take the letter to the family. This letter is never posted. The money can be between 20, 000/= to 50, 000/= . The “applicant’s” current financial position determines the application fee. When the girl’s parents receives the letter, they first ask their daughter at a family level to confirm  the matter. Usually at this stage letters gets confirmed. Then the parents calls their close relatives and friend and to inform them over a calabash of bamboo or corn liquor.
At this session, relatives evaluates the applicant and his family members daily life similar to what the gentleman’ s parents did.  When the application is accepted, they then on the same day decide what the gentleman should give in place of their daughter.   Usually the mention is in terms of the living animals [cows, sheep or goats] plus other minor items like blankets and bed sheets. The date gets fixed when both families, friends and close relatives will meet. This date is the day for the gentleman’s family to give  the dowry.  Food gets prepared and ceremoniously  eaten together if the dowry has been given.  Then wedding is planned and announced by the gentleman’s  party. While other people think that dowry giving is purchasing human beings, it is not so.  Our tribe culturally understands that dowry is to be given.  This is our understanding:  How do you know that one is serious with taking one’s daughter with simple word s such as “ I love your daughter” and “I would like her to marry me”?  Dowry is a taste question and if he gives the dowry, we know he is serious, and thus shall value her and take care of her.

Many marriages last long in Iringa, however these days, there are various challenges due to education, outsiders’ influence  and  money economy. Moses gave cows and was allowed to get married. I paid and I got married. Many other still do and so forth.  Other tribes with many cows give more cows. Wow !!!This sounds strange, eeh! This is how it is, one time  the youth representative in the parliament raised the abolishment of the dowry  issue  to the parliament for discussion, the decision was:  “Let those who are asking bare their own daughters  to give free – not our daughters, “ the members of the parliament concluded.

The Children Make all the Difference – St. Lucia
Scroll to top