Molly, a volunteer serving in Poland, talks about her experience teaching English at Reymontówka camp and a visit to Warsaw.

Today, Saturday was a free day with no English classes, so we were offered an opportunity to travel to Warsaw on a private bus.

Our breakfast for Saturday started with a delicious fried egg over ham. It was accompanied by the wonderful breads and sandwich meats, fruit, juices and kawa (coffee). Our team in front of the Polin museum

At 8:30 we left for the 90 minute bus trip to Warsaw. Our first stop was the Museum of the History of the Polish Jews. This new building is phenomenal, with painted sheets of glass on the outside and a spectacular contemporary façade on the inside with undulating walls. We breathed a sigh of relief when we passed through security without incident.

The downstairs area is called the Core. Here we learned that, according to legend, Jews fleeing persecution came east. When they arrived in a forest, they heard the word, Polin, which sounded like “rest here” in Hebrew. This was the inspiration for the name, Polin Museum of the History of the Polish Jews.

Within the Core the first six hundred years of Jewish history in Poland unfold through the presentation of artifacts, photographs, documents, and films depicting the plight of the Jews over the centuries. During our visit the museum was crowded and you could see an expression of awe and sadness on others’ faces as they heard over and over again of the Jews settling in one area, assimilating as merchants and managers of the nobles’ estates, and then being forced to vacate when an outbreak occurred. We saw images of home life; images of synagogues including the ceiling of the synagogue which was located in Gwozdzieg, now located in present-day Ukraine; and depictions of relationships between the Catholic Church and the Jews.

Changes occurred in 1772-1775 when Poland was partitioned by Russia, Prussia, and Austria. Again the Jews were forced to migrate, leaving behind their homes and lifestyles. Migration continued. One-third of the Jewish population in partitioned Poland left between the years 1880-1914. More than 95% left for the United States and other countries such as Palestine, Argentina, Australia, and South Africa.

When the First World War ended the partition collapsed and Poland was again its own country. During this time Polish Jews experienced a Golden Age. This Golden Age was marked by a revitalization of culture, religion, and politics.

We saw over and over again the establishment of a lifestyle and then its very sad demise. The story of the Holocaust is probably the most horrific episode in Jewish History, with the Nazi invasion of Poland and onset of the mass murder by death squads and then in death camps. We learned that on July 22, 1942 deportations began from the Warsaw Ghetto. This was one step in the Nazi officials plan to annihilate Jews in Europe. Six million European Jews were killed in the Holocaust, and three million of them were Polish Jews.

I personally wished I had more time to visit that part of the visit, but I didn’t want to be late in meeting the others in our group.

Next the plan was to eat our lunch at Łazienki Park and see the Chopin Monument. But we had spent so much time, well-spent time, at the museum that we decided to eat our lunch on the bus and then proceed to Old Town. We anticipated and then enjoyed seeing the historic buildings, shopping, perhaps having some food or beer, and seeing street performers. Our purchases included Boleslawiec Polish pottery, amber jewelry, Polish wooden stackable dolls, Polish shot glasses, and a book on Warsaw depicting the horrific destruction during the Warsaw Uprising.

This book helped us learn that before World War II Warsaw had a population of one million people and was the capital of a country with a population of 33 million. We learned that during the 1944 Warsaw Uprising 95% of the 25, 498 buildings in Warsaw were destroyed. During the Uprising 782 of the 957 historical buildings located in Old Town were destroyed. As we walked about the streets of Old Town it was hard to imagine that in 1945 all of this beautiful landscape lay in rubble. The Polish people demonstrated tenacity within in the midst of grief and loss, when they rebuilt their city to the magnificent city we see today. We truly need to capture more of its grandeur.

Following the Old Town visit we boarded the bus to return to Reymontówka. There we were serenaded by a musician from Warsaw. This rally event was held to inspire and support the local people who are manning the barricade to prevent a company from dumping hazardous waste into the local landfill. This concert lasted nearly two hours. The banquet included speeches and toasts. We were served a most delicious dinner, including salmon over potato pancakes, a dumpling soup, pork roast and potatoes, and dessert of apple pie (szarlotka) and ice cream. 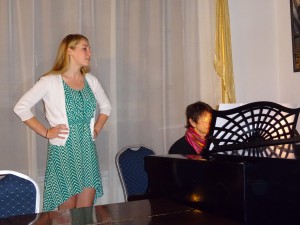 Following the dinner we were serenaded by Bettina who played Chopin compositions and by Meghan who did a classical vocal performance accompanied by Bettina. The day concluded when we retired about 10:30 PM. It was a long day, but one we will never forget.

It is one of the most beautiful compensations of in life…that no one can sincerely try to help another helping oneself.

Attributed to Ralph Waldo Emerson and shared by Corrine