“You’re just jealous, because we act stupid in public and people still love us.” -Unknown The morning classes went like usual for Montana and LuRue doing their normal competition games. The kids started out shy at first, but by the end, the kids were jumping out of their chairs to get up front first. Montana and LuRue ended on the Hokey Pokey, and in the second class a student came up to perform a beautiful solo of the chorus of “Counting Stars” by One Republic. The students seem to be getting braver to come up and perform as the days go by.

Don’s first class was his hotel management class. In that class, he did the flyswatter game with hands, double digit bingo and an adapted version of the drawing game BaoLi had introduced. He also introduced the second verse of “This Land is Your Land”. His second class was a whole new class, so Don had each person introduce and tell a little bit about themselves, which took up half of the class. He spent the other half of the class playing Simon says. 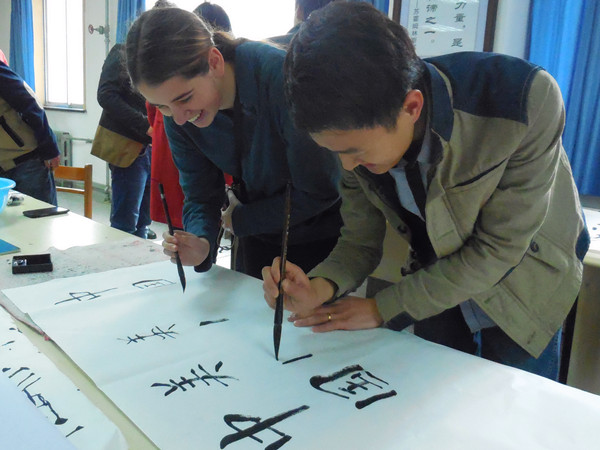 Since we had the students’ exhibitions at 1:00, the teachers took us down to the cafeteria to eat lunch, then back up to the room we were in. Many students were there to show us different parts of the Chinese culture, some of who we recognized. We were shown to some seats in a circle and several different students performed dances and songs of both old and modern. There was even one performance of a type of martial arts. The guy had been studying it to 10 years! Then, it was our turn to shine. With Montana and LuRue’s last minute costuming and on the spur choreography, Don, LuRue and Montana sung/danced to “2 Tigers”, the Chinese version of “Brother John”. More like stumbled our way through it, accidentally singing the wrong lyrics, stepping on each other and doing the wrong dance moves, but hey we survived or at least we think. We were then led to a table where 4 students demonstrated tea making. We could tell they were pretty nervous because, as we figured out later, they were only beginners, but the tea was delicious. Then, we were led to a table where students did calligraphy and drawings. All three of us got to try calligraphy. We wrote the words China, United States and Friendship. Although, none of us would be able to do it again, even if it were a life or death situation. At the end, we were given the drawings as a thank you.

We were back at the hotel with almost 2 hours to spare before dinner. Montana and LuRue headed to the supermarket to stock up on lollipops for the next week. Don went to Dunkin’ Donuts to prepare for tomorrows lesson. They met up for dinner, read the blog, and discussed the day before going their separate ways for the night.