Our team has created a nice routine that seems to be going well for our 5th and 6th grade class. We begin each day by having them answer a question about themselves. After they have written the answer, they read their sentence and answer follow-up questions. Paul does a daily  grammar and pronunciation activity. Today it was a tongue twister, which they enjoyed. Brad ended the period with a quick session of Simon Says. We use Simon Says as a filler and when we see the need for movement.

Second period begins with Brad leading some singing, then I read from a Greek Myth book and we end with Paul working with the class on a readers theater piece, which may or may not be turned into a play performance. UPDATE!: “Goldilocks and the Three Bears” will be performed for the other classes on the last day. 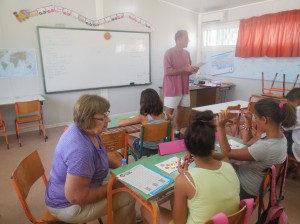 During the 3rd period we do a variety of activities. Today Brad had them do a Command activity. Each student was given a card with a verb on it and, they, in turn, acted out the word. The other students guessed the Command. Brad explained that sometimes a single word can be a sentence, and that that kind of sentence is called a command.

We ended the 3rd period with a card game which they enjoy. After dividing into 3 groups, the cards are dealt. Each student in turn lays down a card and the teacher/leader reads the question associated with that card. The student answers the question with a complete sentence. (The game is in the teaching idea book.) After they come in from recess, they reflect on the day’s activities . . . what they liked and what they would like to see changed. (+, delta)This feedback helps us plan for the next day.

Another Chapter of Global Understanding