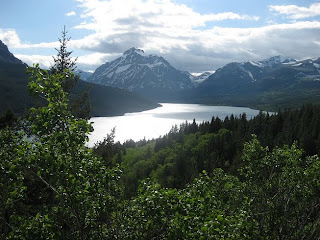 Going to Sunday services in a strange place seemed incredibly daunting at first today. We entered the Methodist Church, and the protective shell I had was shattered immediately as a woman came up to us with a big smile and welcomed us. We sat down and I took in the surroundings. There were between five and 10 people scattered in the brown wooden pews. The pastor came over to us to introduce himself and we learned that his wife was the pianist. His cool way to deliver a sermon — less as a story and more as a class — kept me engaged. My favorite part was the prayer circle, which because of the small size of the congregation, allowed it to be very intimate. Overall, it was a great experience.

This afternoon, we took a tour of the reservation. Seeing snow in June is very strange. Seeing it up in the mountains is one thing, but picking it up was entirely different! This was just one of the attractions of Two Medicine Lake, situated at the bottom of a set of mountains. The view was overwhelming!

Back in New England, we’re not used to seeing anything that compares to the size and beauty of the surrounding mountains. Many of us paused just to take everything in. We also had our first prairie dog siting here. There was a man throwing bits of food to one, and the animal slowly got closer and closer to us. It looked very similar to the squirrels back home, with minor differences in the tail, color and size. The Upper and Lower Two Medicine Lakes were a treat to visit, and it made the power of nature in this area even stronger.

We also hiked to Running Eagle Falls (Trick Falls). As we began the short walk, the sound of rushing water got closer and closer. When we finally reached the end of the trail, the view was incredible! We wanted to cross the rapidly flowing river, but because the bridge had washed out, we needed to find another route. Upstream, we found a log perfectly situated across the river to be used as a bridge. Anderson started to walk across, and finally his judgement kicked in as the log began to slightly buckle underneath him, forcing his return to land.