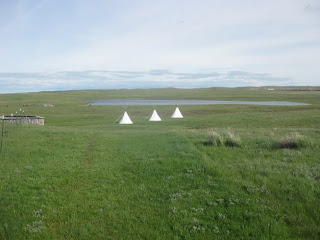 Driving into the outskirts of Browning, we noted what appeared to be an encampment of tipis and tents in the middle of a field. Michele, our team leader, explained that it was a Sundance — an annual four to five-day ceremony held by the Yellow Kidney family. Because of Michele’s relationship with the family and because of Global Volunteers’ reputation in the community, it was possible for us to attend. Preparing for the visit proved to be somewhat of a challenge for the females, as they were required to wear ankle-length skirts. Although none of them had brought skirts, three were left from the previous team, and the women improvised with curtains, a long pillow case and sheets.

We arrived at the Sundance site at 7:30PM after traveling all day from Massachusetts, and were given a few basic instruction about entering the lodge: rotate each foot through the smoke of a sage smudge vessel at the entrance; men sit on the left and women on the right; men would walk around the sacred pole at the center when we left while women would touch it.

We all entered as directed and sat on the ground and got our first look at the lodge. Looking straight ahead, we could see the sacred pole, wrapped in colorful prayer cloths, stretching up to the top, where many branches, all covered in colored string and cloths, reached to the outer wall that was comprised of brush tightly packed and attached to logs that were the foundation of the building.

Many of the men seated behind us asked us where we were from and what we were doing on the reservation. They explained the workings of the ceremony, the importance of the fire, the center pole, and the cloths wrapped around it. Then, a man leaned over, tapping me on the shoulder and offered me a cigarette. At first, I was taken aback; did he want me to smoke it as many of the men around us were? But then he gave me three more for the other men on the team and explained that we should offer them to the men tending the fire, so that they could present them to the Creator and place them at the base of the center pole, where they joined other tobacco — the sacrament the Nation offered up to give thanks for the world around them.

We stayed in the lodge for about an hour and a half, rising occasionally to dance to the music as instructed, and also leaving for a while to chop wood for the fire. Before we left, we were able to speak with the family leader (Nolin Yellow Kidney) who generously answered our questions about the ceremony. It was an amazing and wonderful introduction to the Blackfeet Nation.

A reason to celebrate!Discoveries of the Social and the Natural Kind – Montana
Scroll to top