Of the many similarities between the U.S. and Cuba, one of the more serious social problems we share is the historical racial divide between black and white citizens.  The Creole, African, and Spanish descendants who have, over six centuries, built a rich and soulful Cuban culture, don’t share the same economic and educational opportunities on the island equally. But, as in all of the Americas, these injustices have their roots in slavery, and are slow to be recognized. Can Americans and Cubans work together to heal ethnic divisions in Cuba?  What role does volunteerism have in advancing racial reconciliation?

Comparing the History of Slavery in Cuba and the U.S.

By the time the first large group of slaves were brought to the North American colony of Jamestown, Virginia in 1619, slave trafficking had surged under the British occupation of Havana. Sugar production grew, becoming Cuba’s number one slave-produced crop.  In both countries, slaves took on the form of property and had no rights. In 1880, seventeen years after the Emancipation Proclamation in the U.S., Spain approved an abolition law in Cuba. In 1886,  slavery was abolished in Cuba by Spanish royal decree that also made an indentured servitude system, known as “patronato, ” illegal.

But just as in the U.S., emancipation did not equal equality. Former slaves were discriminated against by businesses and in employment. Black children were not allowed to attend school. All of the issues that follow slavery were very prevalent.  So, Afro-Cubans embraced Fidel Castro’s Revolution,  and Castro embraced them.  In 1959, Castro asserted:

“We shouldn’t have to pass a law to establish a right that should belong to every human being and member of society. Nobody can consider themselves to be of pure race, much less a superior race. Virtue, personal merit, heroism, generosity, should be the measure of men, not skin color. What the eternal enemies of Cuba and the enemies of this revolution want is for us to be divided into a thousand pieces, thereby to be able to destroy us.”

Cubans of varied heritage populate a country of color.

The Castro regime formally outlawed racism in its Revolution, and took many steps to reverse institutionalized segregation at beach clubs, in schools and in neighborhoods, where the homes of wealthy white Cubans who fled were often given to Cubans of color. Now, as the country enters a new era of fast and sweeping change, a long-taboo political conversation about race is confronted in art, music, film, and writing in diverse circles.  In fact, President Barack Obama acknowledged a common legacy of racism in the U.S. and Cuba on his historic visit to Havana in March, 2016. Perhaps in some ways, Cuba has been more progressive than the U.S. in defying discrimination.

Different Opportunities in Tourism and Volunteerism

In the early 20th Century, Cuban tourism heavily catered to the romanticized ideals of Americans and Europeans, producing new jobs and training opportunities. But the economic divide between races has nevertheless widened. As tourism has grown and become more lucrative — a day’s tips can surpass a month’s pay from the government — the staffs of hotels and restaurants have become less representative of the Cuban population.  Jobs offering greater income, with direct contact with tourists, are offered disproportionately to “white Cubans.”

Ultimately, in the case of tourism, the job force hasn’t met Fidel Castro’s goal of equal opportunity. If tourism opens up to Americans, perhaps the added demand will require hotel and restaurant managers to diversify the workplace. Meanwhile in the informal tourist economy, pressures to provide additional rooms and meals have enabled home owners to offer “casa particulars” – bed and breakfast establishments – and ” paladars” – home-based restaurants – despite their race.

But, volunteerism may promote egalitarianism even more broadly.  Working together, we demonstrate that Cubans and Americans – of all colors and backgrounds, are alike, and can work toward a common goal.

Volunteerism has been used as a vehicle for racial reconciliation for years in the southern U.S.  Primarily faith-based communities have reached out across ethnic divides to repair decades of mistrust and to elevate discussions around justice and equal rights.

Properly administered volunteer programs equalize the relationship between local people and outside volunteers who work on a common goal. Volunteerism can create an atmosphere of acceptance and equity which invites others in – to unite entire communities. In the case of Global Volunteers’ work in Cuba, our stated shared vision with our community partners is “to build a bridge of understanding and respect between our countries.”  The service projects are vehicles for accomplishing that.  No one culture, race, ethnic heritage or gender has superiority in this quest. It is here – in our daily work – that divisions are erased, and true racial equality is illuminated.  It may be the one clear road to peace. 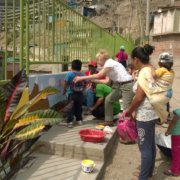