Message of the day:  “Give me the ability to see good things in unexpected places and talents in unexpected people. And give me, O Lord, the grace to tell them so.” (excerpt from a 17th century nun’s prayer) Jo Carol and her lovely students

The unexpected discoveries and unanticipated experiences of the past two weeks have made their mark on me, as indelible, I suspect, as the ink used on ancient manuscripts and as exquisite as the Chinese characters of its written language. Today revealed the final installment in the fourteen day sojourn of Mary, Claudia, and me; Carolyn stays another week. For all of us it was a day of taking in, letting out, and letting go.

Carolyn and I enjoyed a second cup of coffee with breakfast and headed off to the Hi- Tech College while Mary and Claudia made the long trek to their medical college. My students in both two hour classes were fifteen to seventeen years old. They sat close by and diligently practiced their English pronunciation, gamely reshaping mouths and tongues to make more accurate sounds. One young man sang a Chinese song for me. When it was the turn of another young man to tell me what he did for fun, he did not give the typical “play computer games” or “play basketball” but said he liked “to make new friends.” They helped one another in finding the right English words. They looked at a photo of my older daughter and remarked that she was not just beautiful but “very beautiful!” The sat and explored with me a gourmet Chinese food magazine, helping me learn the Chinese names for puffer fish and sea cucumber. In candor I must say that even a gourmet food magazine cannot make a sea cucumber look delicious! The teens laughed at my efforts to make words like “choke”, “poke” and “slip” come alive; universally humor holds students’ attention. All in all, the final teaching day was terrific.

Afterwards, the college dean, former dean, our primary college teacher/organizer/tour guide Lei Suhya, and teacher Vivi, joined by country manager Bao Li and our driver went to the Southern Hotel for an indescribably elegant and delicious meal. The durian cake was to die for! The banter was non-stop. The often pathetic efforts of Carolyn and I to pick up slippery foods with our chopsticks brought much laughter.  At meal’s end we were given thank you gifts of Chinese tea. Carolyn made a lovely toast to begin the meal and I closed the meal with a teary statement about my gratitude for their generosity and friendship. Claudia and Mary were having their own farewell luncheon in a countryside restaurant. Claudia and Mary become good friends with their school teachers

Along with my clothing and a few mementos for family members, I am packing the loveliest of memories. China is nothing that I expected. The students and teachers have been open and authentic. The relationships fostered have been genuine. The Chinese dads hold their toddlers’ hands just as tightly and laugh just as heartily as other dads. The Chinese mothers coo into the faces of their babies’ just as lovingly as other mothers. Strangers smile as we pass on the street. And young men here, like increasingly in the United States, do not offer their subway seat to older women.

Wherever I go from here, whatever I do next, I will take Xi’an, China, with me. What a blessing. How to Volunteer Abroad as a Group 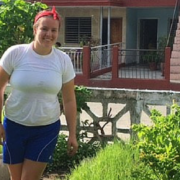 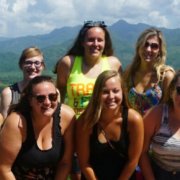 A Day of Service-Learning in Cuba