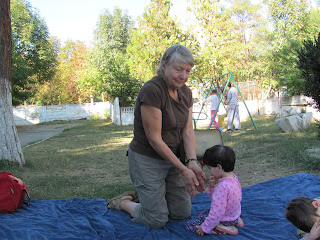 Our second Wednesday started out with what is becoming fairly routine by ordering number 1, 2, 3, 4, or 5 off the menu with a large coffee, or tea, or hot water.  Norma and Jaime are the efficient ones on the team by placing their written orders on their plates before arriving and Ken can be counted on ordering “unt”.

Mihaela arrived and off to the hospital we went for another great morning with the children.  We spent an interesting lunch time at the gallery of Marcel Guguianu.  Mr. Guguianu was a famous sculptor from Barlad who died earlier this year.  Then off to Motel Occident for a delicious lunch of soup and cold cuts.

The weather continues to be beautiful and so the afternoon was spent with several of the children enjoying the great outdoors.  Sammy and Alina even got baths given by Jaime and Nila.  I’m not sure who enjoyed the baths more though, the children getting the baths, or the volunteers giving the baths.

Dinner was at the hotel with the Viennese chicken, tomatoes, and ice cream, followed by conversation.

It is with sadness for me that the two weeks are already drawing to a close.  I have been spending time with Ionut and Marius, the two babies in isolation.  My heart bleeds as I see, and hear them, struggle to breath with their various illnesses.  Today I noticed that the blanket that covered Marius had an inscription on it which read “Thoughtfulness is to friendship, what sunshine is to flowers”.  I thought of the many mums which Barlad planted around the city just five or so days ago.  These past several days of warm sunshine have caused the mums to open up and blossom into beautiful flowers.  In the same manner, I hope that the friendship which we have had with the children over the past two weeks will help them, in some small way, to further blossom and grow.  We take hope that another team of volunteers is scheduled to start next week.  While I am again sad to leave this place, I remind myself that Dr. Seuss saying “Don’t cry because it’s over, smile because it happened”.