This is the tenth post of our series on Myths and Legends. This is the legend of the Terracotta Warriors in China, told by China Country Manager Baoli Wang.

Many foreign visitors know about the amazing Terracotta Warriors in China, but few know that the site where you can see them is in the city of Xi’an, capital of Shaanxi Province. The Terracotta Warriors and Horses Museum is no doubt a must-see site for any visitors coming to Xi’an. Fortunately, it’s easy to visit this site during one of the weekend days on your service program.

It is said that before Qin Dynasty (221BC), people in Shaanxi didn’t use potteries. When Emperor Qin Shihuang came into power, he started the construction of his tomb right away. After looking at many places in the country, he picked Li Shan mountain as the spot. He ordered thousands of laborers to build the tomb. He also wanted to have thousands of young boys and girls be buried alive with him when he passed away. Li Si, his Prime Minister, was ordered to select the boys and girls and carry out the plan.  Li Si was terrified at Qin Shihuang’s order. He knew that would lead to civil revolt, so he suggested pottery figures to be buried instead. Qin Shihuang thought Li Si’s suggestion made sense, so he accepted the idea but ordered life-sized warriors to be made by copying his real 8, 000 palace guards.

Several thousand artisans were selected to complete the task after a nation-wide search. However, none of the artisans had experience of kilning human figures, not to mention making life-sized ones. They tried and tried different techniques but failed. The officials got angry and ordered to have a hundred artisans killed. One of the older artisans, before his death, told his son to try to kiln the body parts first and then put them together. The son did what his father suggested and was able to make a complete warrior successfully after several attempts. The artisans were thrilled. They worked day and night using this special technique, and that was how the 8, 000 terracotta warriors were made.

After Emperor Qin Shihuang died, his son Qin Ershi ascended to the throne. He had Qin Shihuang’s body moved into the tomb and held a celebration to reward each of the construction workers for their hard work. But as soon as all the workers walked in the tomb, the tomb passages were closed. It was said that only one of the workers escaped, and it was the son of the old artisan who successfully kilned the first warrior. He stayed in Shaanxi and made a living by making potteries. Just like the Terracotta Warriors in China, there are many other awesome stories you can find and experience directly during your service program in the country. Sign up now! We won’t close the tomb passages behind you. 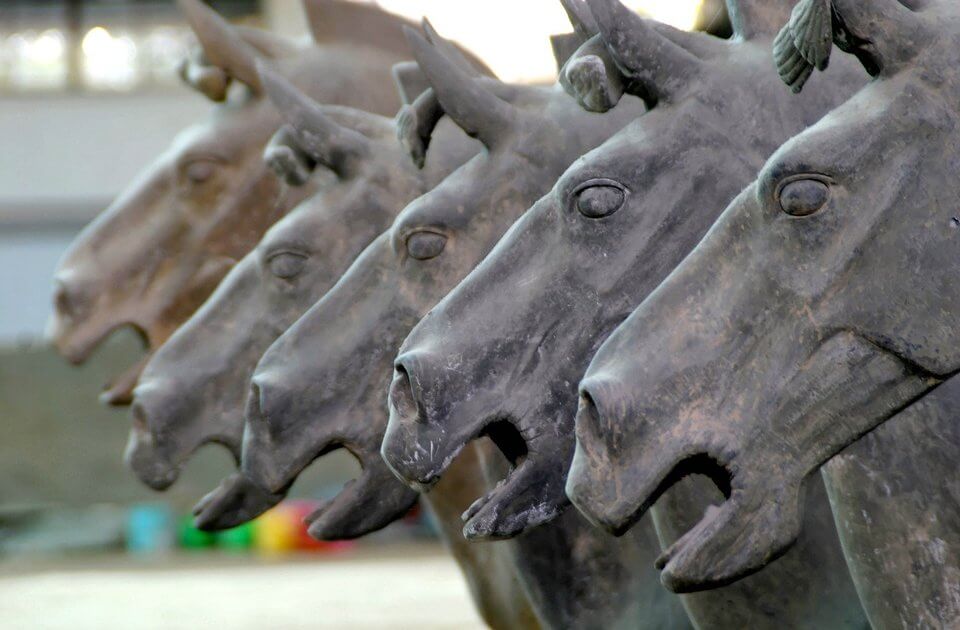 You can also see horses next to the Terracotta Warriors.

The Terracotta Warriors Museum is a magnificent site to visit.

The Chinese Legend of Winter Solstice