After a wonderful night sleep in the very homely facility provided by Stephen, the India country manager, we came into the orientation session on Day 1 fully refreshed. We started the day with yummy breakfast including some nice recipes. Followed by the food, we had our introductions and came to know great things about our companions. Then we slowly gotten engaged into the core session that made its start with the briefing of the various target organizations that we are going to serve in the entire week. Stephen explained us the population, their requirements and other logistics. Then the entire team was assigned to each organization with careful consideration of the interests and skills of the team members. We further had a brainstorm on the assignments and finally came to the best deal by the afternoon. Then took a break for the lunch but good discussions have happened even during the lunch time as well. By the time we finished the lunch, all of us came to know about each one of us that made us feel and interact more comfortable with each other. 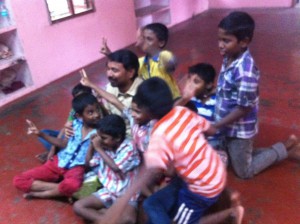 Post lunch, Stephen made a fantastic attempt to keep us engaged to the discussions by conducting a team building, yet a productive activity that brought out a list of objectives for us that we need to achieve by the time we complete this one week program. The way Stephen funneled down all the 26 thoughts (two per volunteer) into just four objectives was worth appreciating. After we finalized our objectives, we took a small break and then got engaged into Stephen’s debriefing of the agenda. That included expectations from the volunteers, their safety measures, and etiquettes to be followed while in the program, policies, guidelines and philosophy. His assertive approach in imbibing the values and behaviors into the volunteers was amicable. Then he explained us about the Global Volunteers, its origin, mission and vision and its mode of operation across the world. At the end, he took us through the basic of Tamil (local language in Chennai) which was the most entertaining ending of the Day 1 program. We all said NANDRI (‘thank you’ in Tamil) to Stephen at the end!!