Wednesday morning at 7:30 found all the Ohio people in the lobby with their luggage, off to catch the 8:04 AM train to Bucharest. Their final destination will be Seattle on Thursday that will go on forever!

Meanwhile Lori was back at Primary School #2 for two classes in the morning and 2 classes in the afternoon.  What do we do with the intermediate students? One day they each received a flash card about a North American animal. They were asked to present the animal, explain where it lived, desert or sea, for example; what it ate; and what its babies are called. Another day this group used flash cards about the states of the U.S. Lori explained that the states’ names come from English, Spanish, and American Indians languages. This helped the students learn how to pronounce some sounds in English and also helps them learn why the language seems to be so complex. After this lesson about the states, one student came up to Lori and said, “I love geography!” The last class in the afternoon, today, had 21 young students of varying abilities. I was glad to have Dan there to help me with this class. They are full of enthusiasm and energy, and 21 pieces of energy is a lot of energy!
At 6 PM the principal from the school, along with his son and daughter, arrived to take Lori to “the best pastry shop in Bărlad. The claim is true! The cake was lovely, and so was the ice cream. 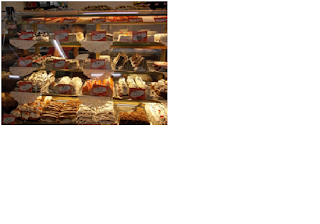 After this great food, we went to the nearby city park and walked about through the children’s area and then along the major boulevards in the park. It was a lovely evening for a stroll. We were lucky for at 5 PM there had been a major thunderstorm and when the principal returned Lori to the hotel at 8:30 PM, the rain began again.