While it’s never cited as the major motivation for joining a Global Volunteers Tanzania service program, a weekend trip to Ruaha National Park and Game Reserve can’t be topped.  This Tanzania safari destination is East Africa’s largest park and game reserve, about 40 miles from Iringa. It’s home to 10,000 elephants and over 500 species of birds, plus giraffes, lions, buffalo, cheetahs, leopards, hippos, baboons, zebras and antelope. And best yet – as compared to $2,500 up to $10,000 charged by commercial operators – the costs for this two-day Tanzania Safari is between $300 and $400. And, team members enjoy it just as much as so-called “luxury safaris.”

“When I applied, you didn’t tell me how much fun I was going to have!”
– Jim Colburn, Tanzania Volunteer

Team member Alyssa Kornowa writes about her Tanzania safari with seven other Global Volunteers at Ruaha National Park  – after a week of working with children and mothers in Ipalamwa.

“Our weekend guides Darrel and Joseph (driver) arrived and off we went! As we left Ipalamwa in daylight, we were able to see what we’d missed on our arrival in the dark. The landscape of the region is breathtaking – soaring mountains covered in countless shades of green; deep valleys where we see groves of fragrant eucalyptus and hillsides of farmed pine trees. The air is scented and cool. The rust red dirt adds to the beauty of the area. The road is bumpy, but the scenery and sense of adventure make the trip into Iringa. A short stop to take a “rest” and we head in a new undiscovered direction.

As we head to Ruaha we notice a dramatic change in the landscape. We leave the lush green and head into a flat, dry, monochromatic land of leafless trees some with the wildest Suessical shapes, especially the Baobab. More unpaved roads but the trick on the flat stretches is speed to minimize the jarring. It works!!

Our destination overlooks the Rift Valley!! The views from the lodge were amazing, stretching out from our individual cabins was a vast sea of grey leafless trees, the flat landscape was accentuated by mountains either singular or with a range. It looks so much like the high desert of California – once a seabed, is this the same geographic history? It’s also the same with Ipalamwa which to me looks like the mid-coast of California around San Simeon. I imagine this is what California might have looked like 200 years ago.

The lodge is rustic and comfortable and the staff greet us warmly. Dinner is buffet style and very good. After dinner, we are treated to the most wonderful night “star-vies.” The Milky Way and so many constellations which for a city dweller like me was a beautiful experience. We are off to sleep with open windows and nice breezes. We have an early start tomorrow for the safari.

We awoke this morning with the air blowing fresh through the barren trees as we anticipated the sun’s rise over the eastern mountains. A splash of golden color, and our day had begun. Ezra served us eggs, of course, along with cinnamon bread, fruit and some type of savory pancake. And juice of a mix of passionfruit and avocado. It was pretty delicious. We gathered up our things and left the lodge for our Tanzania safari, and a day of ADVENTURE it was! The number of animals we saw was unbelievable!

The large group split into two, with an open-air safari jeep and another jeep with a pop-up roof for 360 degree viewing. Park entries were paid by us, Joseph (our driver) and our guides Moses and Darrell and then we were on our way. Not even a few minutes into Ruaha National Park we were greeted by beautiful impala with their tan coats, stunning black and white markings, and spiked horns. Then came the kudu (greater and lesser), for which the park is known. As we rolled down the dusty road, we caught glimpses of the baboons and had our first encounters with giraffes, their long, black tongues plucking the red brush-like flowers from all that remains on the burning bush. During the dry season, this shrub is one of the only plants that sustains some of the animals. The bare trees left more opportunity to see the animals, but I think we all wondered what exactly it would be like during the rainy season when all the vegetation remained and varying shades of green quilted the landscape.

Our first stop was over the Ruaha River where we could view hippos and crocodiles from above. Many of us struggled to see the hippos as they appeared right before our eyes but blended in so well with the rocks. The crocodiles were very inactive as they sunbathed on the shore or slowly swam with their heads just above the surface. The birds we saw in the park often took a backseat to all the other animals but were impressive to watch in flight or when we could catch a glimpse of their colors. The birds included kingfishers, palm swifts, red-billed and ground hornbills, social weavers- who made nearly perfect round and golden grass nests- Guinea fowl- which frustrated Maynard to no end as he could never get a good photo before they scattered- tawny, batura, brown snake, and fish eagles, vultures, starlings, hammerkops, and saddle-billed storks, whose huge black and white wingspan and red markings and bill could be seen from a great distance. And these are just the birds that were pointed out to us. There were so many more.

As we made our way through the 22,000 square kilometer park, we came upon zebras, water bucks, elephants, warthogs, mongoose, and finally gazelles and jackals. But some of the most impressive were the lions and leopards. Earlier this morning, Ezra said we were going to have a very good Tanzania safari day because we had the good fortune of seeing the baboon below us in the trees while eating breakfast. And he was right! While we were driving along the road, Moses had his eyes peeled for all animals and there he found, lying under a tree on a rock, a female leopard sitting perfectly still. She didn’t hardly move as we pulled right up alongside her. With her tail twitching slightly, she seemed to be unaffected by our presence. Whether this is good or bad, I don’t know. Moses was very excited to tell Darrel in the other vehicle and word was passed around to the other guides about the leopard’s location, since they are so rare to find.

Our group stopped for a packed lunch near the dried riverbed where we could view some elephants who were digging their trunks in the sand to obtain any moisture that might remain below the ground. It was getting pretty hot so after lunch it didn’t seem like we saw as many animals out. They were probably trying to protect themselves from the heat. You could tell that the guides were looking for something special though, and it felt like we were in habitat where some lions might be. Suddenly, one of the guides spotted an area with a ton of vultures in the trees, and where there are vultures, there is most likely something dead for them to feed on. And where there is a fresh kill, there is oftentimes a lion. And this was exactly the case. Under the vultures lay a fairly fresh giraffe carcass, probably taken down by one of the 3 lions we found lying beneath a bush in the shade. It’s not a Tanzania safari without seeing lions feeding on a fresh kill. Again, the lions hardly noticed us as we pulled right up next to them. At this point, our day had pretty much been complete but not without seeing hundreds of impalas as we headed back to the entrance of the park.

But our day got even better with another type of adventure! We had to cross the dried riverbed once again before leaving the park so our guides told us to “hold on tight, always” as the big safari jeep tried to keep up its speed as it sunk into the sand. Joseph pressed on getting some magical traction from somewhere, leaving the smaller jeep with the other volunteers in the dust, now stuck in the hot sand. After crossing, our guide was able to connect with another vehicle that had a massive chain to tow the jeep. After about 20 minutes, we were again on our way. It’s hard to imagine what might happen without trusty guides and vehicles! It’s a long way to the park entrance!

As we ended our Tanzania safari, we passed through an “elephant graveyard”- not the type with skulls and bones but one with dead and fallen trees. We learned that the elephants strip the bark from mostly the massive baobab trees to obtain the calcium, nutrients, and moisture during the dry season. As the elephants strip the bark down low, they try to reach up further and further, even standing on their hind legs to get as much bark as they can. The stress this puts on the trees weakens it until eventually it becomes so deprived of its nutrients that it can topple down with the tug of an elephant’s trunk. The elephant, and then even some other animals, finish stripping the bark and remaining leaves, if any, and what’s left is a very blackened, dead-looking forest of downed trees. Driving through the “elephant graveyard” left an indescribable eerie feeling.

Somehow, we left the park feeling exhausted. It could be riding in the heat, but more likely it was just the fact that our senses were on overload all day as we tried to take in everything we could. Just after turning off the main road to head up to the lodge we saw yet another surprise! No, not a cheetah or water buffalo like we were hoping for to complete our Big 5 list, but the other jeep with a flat tire! One of the volunteers ironically had just asked Darrell how long tires last on a vehicle that puts up with so much abuse from the rough terrain – and not a minute or so later, bam… a flat tire! Thankfully these guys know what they are doing, and can have a flat fixed within minutes. How long would it take us since I’d bet most of us are either out of practice or have never even had to change a tire? It wasn’t long at all before the rest of the group joined us in receiving a  sweet cold towel from the lodge staff to wipe all the sweat and sand from our faces. Since we had some time before dinner we all freshened up and rested a little. Delicious peanut soup and salad, along with fish, vegetables, and potatoes were served for dinner. We reminisced about our day and soon everyone retired to their cottages, too tired from our Tanzania safari of a lifetime.”

Want a true humanitarian trip? Help mothers and children – and enjoy a Tanzania safari as a bonus! Read more on the experience below or visit with one of our Volunteer Coordinators about date availability: 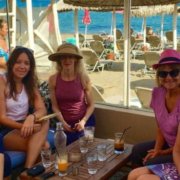 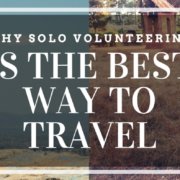