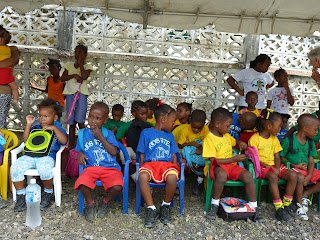 Our four-member team arrived at the Marigot Secondary School in time for teacher’s morning briefing in the staff lounge. The school briefing opened with the Lord’s prayer and a recitation of the 23rd Psalm. How is it I can remember the words to a Psalm from childhood but can’t remember why I have walked into a room?

While waiting for all the students to arrive for our first class, I chatted with one of the boys. I asked how long it took him to get to school each day. He reported he lived in a town about 10 miles away. He gets up at 4 AM, leaves his house at 5 AM. He catches a bus to another town where he has to wait for a bus, which will bring to Marigot. He arrives at the school around 8:15. At the end of the school day he walks the 10 miles home. Mr Morrisette confirmed his story. This young man can barely read, but is committed to getting to school daily. I did not ask, but I suspect he cannot afford to pay for the bus both ways – that’s why he walks home. In one of the other remedial readings classes the topic was “The Interview”. We watched an interview of President Obama and discussed it briefly. Next three students were allowed to interview me. 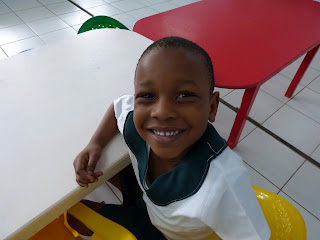 After lunch Martha and I visited the Agricultural area of the school campus. There are a number of corps growing a large hoop houses well as in terraced row outside. We viewed an Earthbox with 2 tomato plants one of which was fruited. Green beans are being picked. Watermelons will be ready soon. We stopped by to say hello to the rabbits then returned to the main campus. Warren had delivered a number of earth boxes earlier in the day to be secured until later use.At the end of the school day Mr Morrissette announced he would only be at school tomorrow morning for half an hour. He was going to visit the cricket matches. There are matches going on over several days between a team from Australia and a Caribbean team. The captain of the Caribbean team in from St Lucia so there is high interest.  We were picked up by Ian and delivered to JJ’s where Ian had his sign up sheet for weekend tours. Next on to a shower and 5:30 meeting.

Spoke with Ron about going to the Primary School on Friday. After our evening meeting we adjourned to JD’s where we enjoyed a wonderful meal by the water. It was Dotty’s birthday. Colleen managed to present her with a wonderful red velvet cake. It was shared by all of us. After dessert, one of the Toms and I walked back to JJ’s, where I dropped him off at the pool. It has been a long day. I look forward to a good night’s rest and off to the primary school tomorrow.

Getting Our Feet Wet

Effortlessly Support Global Volunteers – At Home & At No Cost
0 replies